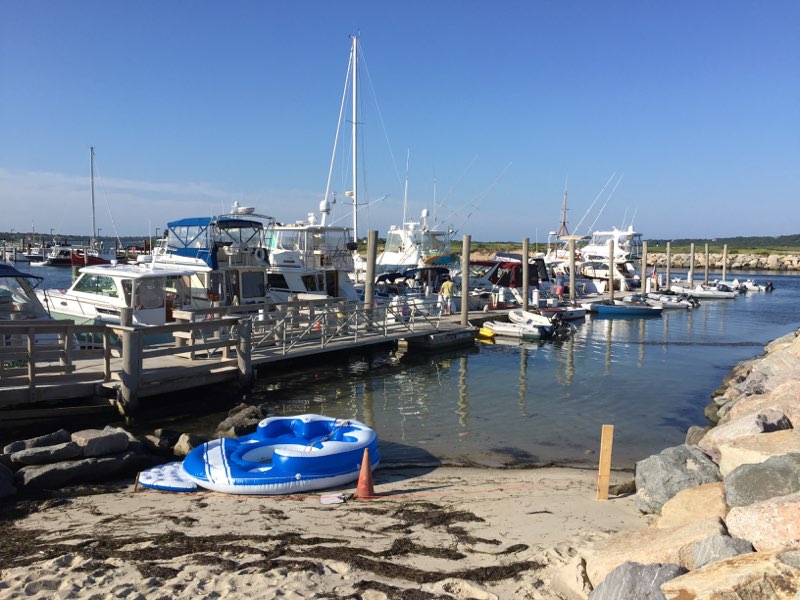 An electrical contractor under the direction of Cole Powers, Chilmark’s inspector of wires, will try to put an end to the intermittent seepage of electricity into the seawater in and around Crab Corner in Menemsha, where several children on a West Tisbury School beach outing on June 21 reported feeling a charge while they swam or waded.

Repair work is scheduled to take place July 12 beneath the transient dock, the suspected locus of a recurrent “tickle” of marine electricity. The electrical problem seems to stem from grounding work executed by a contractor five to eight years ago, selectman Jim Malkin told The Times.

“This seems to be the most probable cause that they can identify,” he said.

The harbor bed beneath the transient dock has been dredged, according to Mr. Malkin. He said he has since spent time with an electrical crew examining the underside of the dock, and did not encounter any electrical sensations, he said, but acknowledged that several other people have experienced electric sensations over the past week or so. Mr. Malkin said he found the sporadic nature of the electric current mystifying.

Former West Tisbury School science teacher Karl Riley isn’t sure the town has accurately identified the electrical anomaly. Mr. Riley is the author of “Tracing EMFs in Building Wiring and Grounding.” EMF is an acronym for electromagnetic field. According to a passage within that book, Mr. Riley has appeared in a three-part series on “Good Morning America” where he detailed EMF consulting he did for a school district in California.

Mr. Riley told The Times he went to Menemsha after learning about the electrical problems there and offered his assistance to town officials. Harbormaster Dennis Jason allowed him to inspect the transient dock and its vicinity, Mr. Riley said.

“I read strong magnetic fields on my gaussmeter all the way out to where the kids got the tingles. There should be no readings if wiring is correct,” he wrote in an e-mail. Similar measurements on the adjacent Texaco fuel dock revealed no abnormalities, he said.

“I then opened the first door of the subpanel and took a few measurements with a clamp-on ammeter,” he wrote. “So as not to get ahead of myself with diagnosis, I won’t say what I measured, but one measurement was surprising, and puts a new light on the cause of the problem.”

Mr. Riley said he was barred from accessing the main panel. He did not clarify who prevented him from accessing it. He said he was told by Mr. Malkin that any further questions he might have about electrical problems in Menemsha should be directed to the inspector of wires. Mr. Riley said he has yet to reach Mr. Powers, and that the contractor onsite was uninterested in discussion.

Mr. Malkin described Mr. Riley as “intelligent” and “well-meaning,” but he said the matter at hand would be best solved by licenced electricians. He added that a number of other people have come forth with offers of assistance.

Though Crab Corner remains closed, an inflatable blue raft sat tethered on the shoreline there Monday. Reached by telephone, a staffer at the harbormaster’s office acknowledged the presence of the raft, but declined to comment on whether its presence was counter to the restrictions imposed on Crab Corner.