Boyd Hand Cowper, 89, of East Chop, was a force to be reckoned with. He died on March 24, 2017, after a short illness. Boyd and his wife Jocelyn, married for 64 years, have spent summers in East Chop since they first came here from Montreal, Quebec, in the early 1960s. 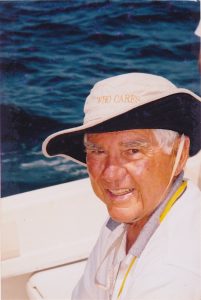 His family remembers Boyd as someone who was restless. Until his last days, Boyd kept busy — with his real estate ventures, going to the beach, swimming, sailing, kayaking, and clamming. No matter how old, Boyd couldn’t miss out on the fun.

We also remember him for his stories. He loved to talk — if you knew him, you know this is true. He made you wish you were alive during the good old days, and if you were, you wished you had lived them out like he did.

In his youth in Canada, he played water polo and was a top downhill ski racer. Throughout his life, he was a great swimmer, and loved to sail. Four years ago, he lost a kayak race in Sengekontacket, but won a prize for being the oldest contestant.

Boyd was immensely proud of his children and grandchildren, as they are of him. He is survived by his wife Jocelyn, his children Bruce (wife Josette Biagini) of Montreal, Quebec, Rusty of Fredericksburg, Va., and Corey of Sarasota, Fla., and his six grandchildren, Alexandre, Ariane, Fay, Peter, Lily, and Nevin.

East Chop will remember Boyd’s vibrant presence, his entrepreneurial spirit, his great conversation, and his love of the ocean, and he will be missed dearly.