It was standing room only at the Whaling Church for I’m With Her’s debut concert on Martha’s Vineyard, put on by MVY Radio. The band, made up of Sara Watkins, Sarah Jarosz, and Aoife O’Donovan, combines American folk with traditional melodies from Sweden, Ireland, and around the world. Their music felt both raw and refined, evoking a sense of timeless interweaving of eras and emotions. They asked that people not film or take photos with their phones, but rather enjoy the music in the moment. The trio looked entirely at ease on stage, pausing to introduce the next song, trade jokes, talk about their inspirations, and tune their instruments. “We tune because we care,” Sara Watkins quipped.

The band’s manager, Ben Levin, said, “There is something utterly indescribable about how the group both sings and plays in harmony, complementing one another and with such pure and honest joy. It’s infectious.”

I’m With Her formed after a 2014 impromptu performance at the Telluride Bluegrass Festival. The members had run into one another many times over the years, but by the spring and summer of 2015, they were touring the world together. They talked about their time in Vermont eating too many tacos, and their shows in Sweden, where they took inspiration from the other bands they played with.

Their set included covers of songs such as John Hiatt’s “Crossing Muddy Waters” and pieces from the musicians’ separate albums, which all came out in 2016 — Watkin’s “Young In All The Wrong Ways,” Jarosz’s double-Grammy-awardwinning “Undercurrent,” and O’Donovan’s “In the Magic Hour.”

At the Whaling Church, their performance included an encore bookended by standing ovations. The night had a celebratory feel, as earlier in the day the young band had released their first original song, “Little Lies.”

The release is in advance of their upcoming tour, which will begin at the end of July. They will be playing a set at the Newport Folk Festival, and other performances can be found at their website, imwithherband.com/. 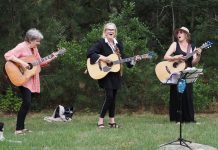 Have songs, will travel 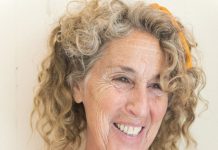 Writing from the Heart: Finding a sliver of joy 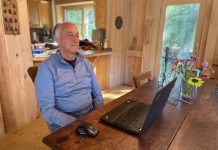