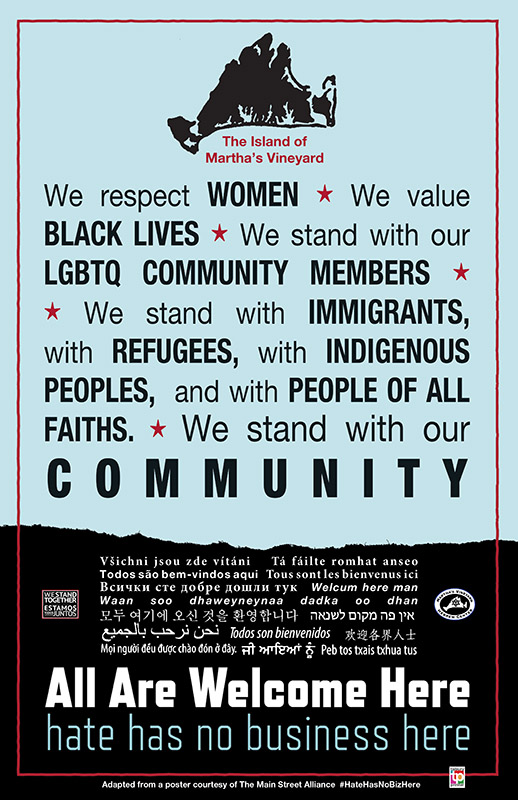 While visiting her children in Takoma Park, Md., Chilmark resident Bonnie George noticed that store after store had the identical poster prominently displayed in their windows. The sheer number of posters caught Bonnie’s attention. She stopped to read the text: “All Are Welcome Here. We respect women. We value black lives. We stand with our LBGTQ community members. We stand with immigrants and refugees and people of all faiths. We stand with our community.” Ms. George was so moved by the message that she went to the Takoma Park Chamber of Commerce and spoke with Laura Barclay, executive director of the Old Takoma Business Association, the group sponsoring these posters. Could Bonnie have a copy? Could she bring it back, reproduce it, and distribute on Martha’s Vineyard?

Ms. George brought the poster to the Martha’s Vineyard Hebrew Center Social Action Committee (SAC), which enthusiastically embraced the project. Wishing to adapt the design to reflect the Vineyard, they traced the poster’s origins in order to get any necessary permissions. The prototype text came from a poster distributed by #HateHasNoBizHere, the Main Street Alliance, a national coalition of small businesses working to provide small business owners with a voice on national public-policy issues. Then, in Takoma Park, artist Leda Black had redesigned the graphics to personalize it for that town, including their iconic “Roscoe the Rooster” logo.

Roscoe was a rooster that wandered around Takoma in the 1990s. Described as “a free spirit that defied the authorities and found sanctuary with business owners and residents alike,” Roscoe became a kind of town mascot. Nancy Luce would have approved. Nonetheless, it was decided that for the Vineyard posters, it made sense to remove the giant chicken, and add a picture of our Island. Sally Cohn, president of the Martha’s Vineyard Hebrew Center, worked with the Tisbury Printer, who supported the effort with discounted fees. Local grassroots community organizing group We Stand Together/Estamos Todos Juntos (WST/ETJ) also came on board.

The bottom third of the poster consists of the phrase “All are welcome here” in many different languages. In order to acknowledge the diverse Island community, other languages were added, including Portuguese, Jamaican patois, Czech, Gaelic, and Bulgarian. The group hoped to include the phrase in Wampanoag as well. It is considered respectful to ask permission from the tribal council before using a Native American language on something like this. When the group was unable to obtain the tribe’s approval in time for printing, it was decided to voice support for the tribe on the Vineyard, as well as Native Americans across the country, by adding the statement “We stand with indigenous peoples” in the top section of the poster.

When the posters were completed, volunteers went door-to-door to businesses across the Island. Some businesses hung the posters proudly on their doors. Others declined. Some took the posters, but never displayed them. Others hung them up, but later took them down. But week by week, overall, they began to cover the Island. The posters were free, but donations were accepted to cover costs and future printings, with any residual funds to be donated at the end to the Island Food Pantry.

Then the MVHC SAC began getting calls from visitors who had seen the posters here and wished to bring them back to their winter communities. Two such people are Andrea and Deborah Bolling. The sisters are from a prominent African-American political family and are long-term summer residents. Andrea is a business consultant who does diversity training. Deborah is a real estate broker and owner of Bolling Real Estate. They hope to bring the poster to the Fenway and greater Boston area.

“For me, the poster encompasses the ideals that my family has championed for over eight decades — inclusiveness, economic and social parity, acceptance based on you being a human being and not whether others can see themselves in you. I look forward to partnering with fellow businesspeople, nonprofits, and the secular community to use the poster to acknowledge that for many, full acceptance has not yet materialized,” Deborah says. “I want the poster to move people to self-examination and action so that we, individually and collectively, are more genuinely accepting of others. At the end of the day, all of us matter, and all of us should matter equally.”

Andrea gives a more emotional response about how she felt when she walked into a business that had the poster in the window. “When I saw the poster I was able to breathe. I knew that I was safe, that I wouldn’t have to worry about profiling, or making sure business owners are comfortable with who I am. I could be myself. The holding of breath is an unconscious response many of us have when we enter businesses. When I saw the poster I sighed with relief, and smiled. My thought was, ‘I can get with this,’ and my desire was to support the business.”

“As a business consultant who does diversity training, I know how important it is to take affirmative steps to demonstrate commitment to nondiscrimination. The ‘hate has no biz here’ poster is a compassionate commitment to end intolerance and foster inclusion. Bravo!”

The posters are currently in their fourth printing, with more than 250 having been distributed across the Vineyard. Somewhere Roscoe is crowing.

Posters are currently available, free of charge, at Island Entertainment and the Martha’s Vineyard Hebrew Center, and through WST/ETJ.

Over the hills and fore away