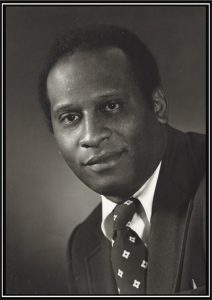 Eugene Graham was born in Harlem to Dolly and Charles Graham on June 3, 1941. Raised on 141st Street, Gene attended St. Charles Borromeo Roman Catholic Church and its school, and as an altar boy, enjoyed serving parishioners.

Gene was a talented sprinter, and after graduating from Aviation High School in 1959, he received a full athletic scholarship to Indiana University, and left New York for the Midwest. During his years as a Hoosier, Gene’s athletic excellence contributed to his team’s dominance of the top half of the Big Ten. When Gene graduated in 1966 with a B.S. in business administration, he became the first member of his family to graduate from college.

Also in 1966, Gene was recruited by General Electric to participate in its prestigious Business Management Program. By doing so, Gene became part of the first wave of black men and women to integrate management positions within Fortune 500 companies.

For the next 35 years, Gene became a corporate warrior, ascending the ranks at Digital Equipment Corp., Polaroid, and Raytheon. He was a manufacturing expert, and in 1981 he received his M.B.A. from Baldwin Wallace College.

Though he received numerous honors and awards over the years, Gene was particularly proud to be named a Harlem YMCA Black Achiever in 1976. The honor speaks to Gene’s legacy within the business world — that of recruiting and mentoring young black professionals, often providing them access to their first step on the corporate ladder.

Through his work, Gene traveled the world, but he always found great pleasure on Martha’s VIneyard. Since 1966, Gene had vacationed on the Island, and in 1989 he purchased a home here.

Over the years many wonderful memories were forged with family and friends. He enjoyed sailing and cookouts with his grandchildren. In 2003, Gene retired to Martha’s Vineyard, but he would still make it off the Island to catch a Jets game with his closest friends.

A highlight of retirement was participating in the 50th anniversary reunion of his Indiana University track and field team. He was so happy to journey back to Bloomington, Indiana, one last time to reconnect with his fellow I-Men teammates.

Due to declining health, the remaining years were challenging for Gene. Still, he loved his life on the Island — the sound of the ocean, the warm summer breeze, and watching people enjoy themselves at the Inkwell.

Gene always displayed the qualities of a virtuous man — faithfulness, dependability, kindness, moral integrity, fatherliness, a sense of humor, intelligence, and passion. These are qualities that he passed on to his children and grandchildren. We will miss him dearly.

The family wishes to express its gratitude and sincere appreciation to all friends, neighbors, and those in the community, in New York and Martha’s Vineyard, for their expressions of concern and thoughts at this time.