Greg Skomal makes his living poking great white sharks with a pole aimed at fastening a tracking device to them. Sometimes, to get the best electronic tags on the large beasts, he has to get so close he can tell what the shark had for lunch.

Yet getting ready to give a talk before a standing-room-only crowd — an estimated 500 people in Edgartown Tuesday night — had the shark scientist a bit on edge.

“I’m kind of nervous, actually,” he told The Times, as a steady stream of people flocked inside the Old Whaling Church.

He shouldn’t have worried. Mr. Skomal had the crowd gobbling up his every word like a great white feasts on a gray harbor seal.

Mr. Skomal, a state shark expert with the Division of Marine Fisheries, was making his first speaking appearance on the Island as a fundraiser for the Atlantic White Shark Conservancy, a Chatham-based nonprofit that helps fund some of the expensive technology that Mr. Skomal uses in his shark research.

He was invited to Martha’s Vineyard by Ben Ross, an Edgartown resident who has done some research trips with Mr. Skomal, and who convinced him to deploy a buoy off South Beach to track shark activity near the Vineyard.

It turns out that Mr. Skomal has Island roots. He lived on the Vineyard for 23 years, and did some of his early shark research, the non–great white variety, here on the Island.

“I cut my teeth here, so to speak,” he said to some laughs. “It’s a homecoming. I’m a little nervous because it’s a place where I can’t make stuff up.”

And that’s how his talk went from start to finish.

He was light. “When you have a restaurant that looks this good, you’re going to get a customer,” he said, showing photograph of a Chatham beach with what looked like hundreds of seals.

He was engaging. “‘Jaws’ is the coolest movie,” he said, referring to the famed movie that used Martha’s Vineyard for the fictional Amity Island.

And he was informative. “We’ve tagged 110 sharks. The number just went up. We tagged one yesterday,” he said.

There were audible “ooohs” as Skomal showed video of a seal jumping out of the water and narrowly missing the snapping jaw of a great white. Some “aaahs” when he showed a great white chomping his GoPro camera just last week.

And more laughs as he showed video of a Woods Hole Oceanographic Institution autonomous underwater vehicle getting savagely attacked by a great white shark in the water off Mexico. “That’s why the engineers don’t like me,” he deadpanned.

Mr. Skomal told the audience his work is being done to get a better understanding of the habits of great white sharks. His research is still trying to put a number to just how many sharks are out there in the waters off the Massachusetts coastline. What they do know is that from late July to November, the coastline of Massachusetts, particularly Cape Cod, has become a hot spot for great whites, joining Mexico, South Africa, Southern Australia, and California.

Tagging efforts have allowed researchers to track great whites and get a sense of what it is that drives their migration patterns. It’s also allowed the development of a smartphone “Sharktivity” app that keeps the public informed of sightings. An effort is being made to track a shark in real time using electronics, something that Mr. Skomal hopes to deploy and test soon off Chatham.

How big a threat are great whites to people? The last reported fatal shark attack in Massachusetts was in 1936, Mr. Skomal said.

“We are collecting data and sharing with beach managers, so they can manage public safety,” he said.

Cynthia Wigren, executive director of the Atlantic White Shark Conservancy, told the crowd her fascination began with a trip to South Africa, and the nonprofit is working to change the public’s perception of great whites, some of which still lingers from that ’70s movie filmed on Martha’s Vineyard.

“The more you learn about sharks, the less you hopefully fear them and become fascinated by them,” she said. “Our goal is to change public perception, so you’re not thinking about ‘Jaws,’ but the important role this shark plays in our environment.”

A week before Tuesday’s event, Mr. Ross called The Times with a little anxiety of his own, wondering if anyone would attend the event. Outside the Old Whaling Church, the sun fading as folks lined up 20 deep to get in, he laughed off those worrisome moments. “We should do this again next year,” he said.

To paraphrase a line from that great white movie, they may need a bigger venue. 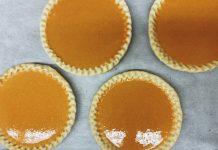