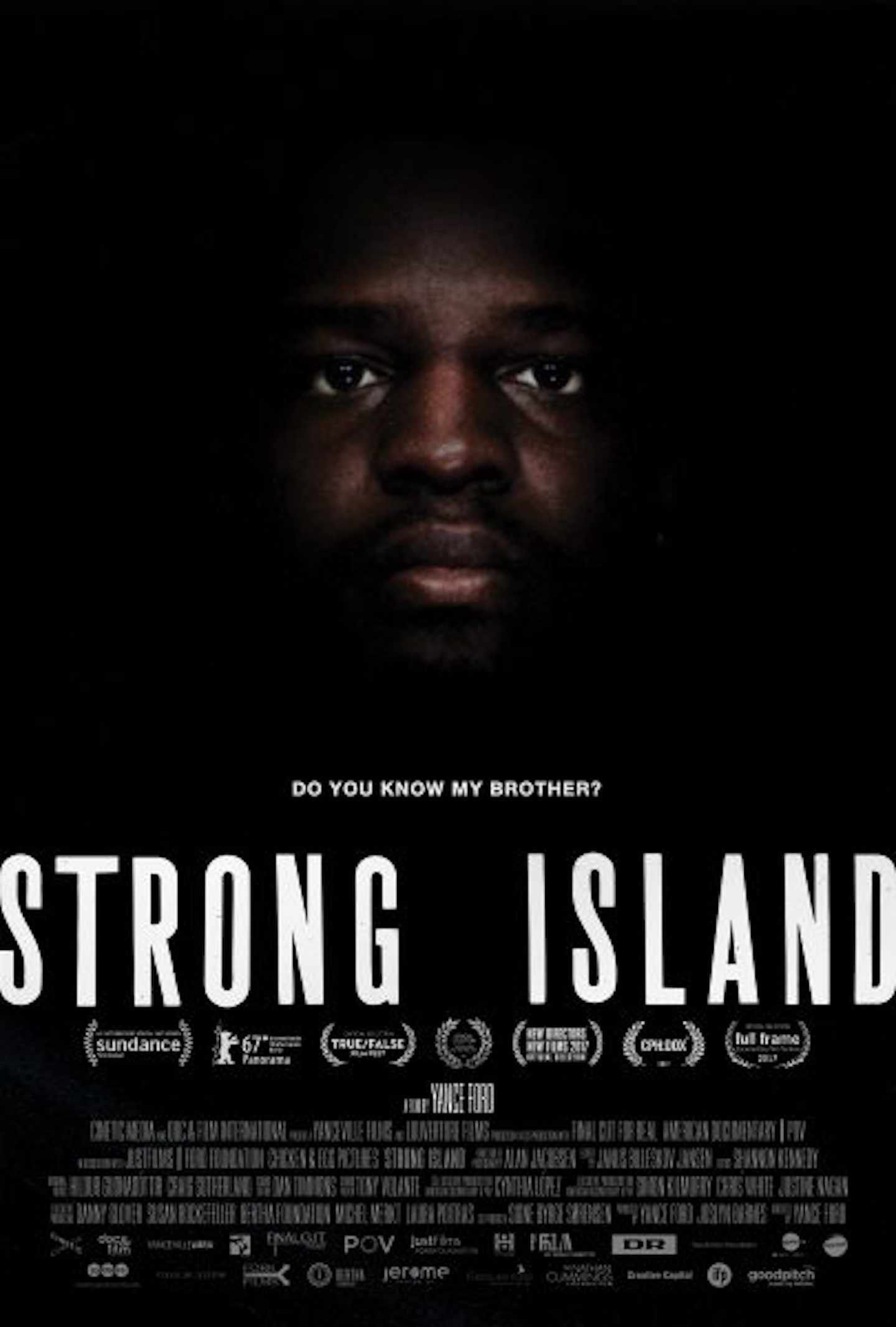 Some of the films screening at this year’s Martha’s Vineyard African American Film Festival are so heavy that the weight of them alone could round your shoulders. There are 51 indie films and seven studio films included this year — “Detroit,” “Marshall,” and “Rodney King” among them. The festival runs through the week, and ends Saturday with Spike Lee’s revamped “She’s Gotta Have It.”

Floyd and Stephanie Rance of Run & Shoot Filmworks have put the festival together for 15 years now, an accomplishment on its own. Floyd said the film festival started out somewhat organically. Stephanie worked in public relations, and Floyd was in the film industry.

“She did an event here [on the Island], a small impromptu event with Martell cognac,” Floyd said. “Maybe 50 or 75 people showed up. She rented a house on the water, there was cognac and dancing. She did this two years in a row, and the third time a filmmaker came. She had hooked up this screening at Ben Hall’s old dilapidated Island Theater. So we decided to go, and there was a line around the corner of people waiting to see these short screenings. My wife was like, ‘Wow.’ So she comes home and says, ‘I’m gonna do a film festival.’ Literally, that was the conversation.”

The couple was organizing a film festival in Barbados when the island’s tourism organization was trying to attract more African American visitors. Then 9/11 happened, and their Barbados connections were wary of bringing the festival there.

They had a couple of sponsors for the canceled Barbados event, and 10 films. “So I said, ‘Let’s do it on Martha’s Vineyard … this was Plan B,” Stephanie said. It was July, and 10 people showed up, they said.

“Then we said, Let’s do it in August, and here we are … over 2,000 people, and we fill this theater [Performing Arts Center] up every night,” Stephanie said.

The Rances have two children who are growing up alongside the festival, and they’ve seen festival volunteers go on to build careers in the film industry. They said giving filmmakers a place to show their films is important.

“We want to give the filmmakers some inspiration, give them an opportunity to have their content seen and receive adulation and appreciation from unknown people. It gives them an opportunity to get their feet wet, and experience in presenting and answering questions,” Stephanie said. The Rances said they have found a lot of support from Islanders. “Folks are very supportive of us — Susan Goldstein, Jim Novak, Charles Ogilvie, Charlie Esposito, Spike Lee — and the high school has been wonderful. Folks who live here look forward to it, it brings their friends back,” Stephanie said.

They both watch every entry, and work together choosing which films make it to the festival.

“Some are no-brainers,” Floyd said. “Like ‘Strong Island,’ that was a no-brainer. That’s a story that needs to be told.”

“Strong Island,” Yance Ford’s memoir about injustice, grief, race, and family does stand out. The film, which won a U.S. Documentary Special Jury Award for Storytelling at Sundance this year, is deftly told through a lens that sometimes focuses on Ford’s family snapshots taken in the ’60s, ’70s, and ’80s, pictures that could have come from any family’s sticky-backed photo album. Then there are still shots of a nondescript mechanic’s garage, where Yance’s older brother William was shot in 1992.

Along with the photographs, filmgoers see and hear Yance’s chilling wails after a telephone conversation with law enforcement who were involved in William’s case. The film is deeply personal, and lays open raw wounds that haven’t healed after 25 years.

Rather than begin the film with his brother William’s murder, Yance, who is transgender, instead opens the film with his mother talking about how she met their father and how they fell in love, got married, and left the Jim Crow South for New York, settling in Brooklyn.

An accomplished educator who founded a school for women on Rikers Island, Yance’s mother, Barbara Dunmore Ford, speaks to the camera with an eloquence that reveals a woman who was as strong as she was wise. The story unfolds through conversations with Barbara, Yance’s sister Lauren, William’s best friend Kevin Myers, who was with him the night he was shot, and Yance himself.

William Ford Jr. was 24 when he was shot in the chest with a .22 at a chop shop in his neighborhood. His girlfriend’s car had been hit by a truck belonging to the Long Island garage, and they agreed not to report the accident and the shop would fix the car. Frustration mounted as family members checked with the garage on the progress of the repairs, only to find it wasn’t fixed. Tempers flared, words were exchanged, and William eventually grew angry enough to throw a vacuum cleaner and to menacingly pick up a car door during a trip to the garage. That was three weeks before he was shot by Mark Reilly, a white 19-year-old employee at the shop. Reilly had cursed out William’s mother when she had checked on the car. William had a history of being protective when it came to friends and family, and on the night he was shot, one of the last things he said to his friend Kevin was, “That’s the kid who cursed out my mother.”

Kevin called William’s mother the night of the shooting, and when she showed up at the crime scene, she said, “No officer spoke to me, no officers would look at me.” It was Kevin who told her that Mark Reilly shot her son. The police didn’t even handcuff Reilly.

As much as his brother’s 1992 homicide is the focus of the film, so is Yance’s grandfather’s long-ago death from an asthma attack because the hospital he was taken to was in no hurry to attend to a black man. The racism and fear Yance’s family encounters is at times as gripping as the story of the homicide. Yance’s mother Barbara says in the beginning of the movie that when she was growing up and black children were faced with going through a section of town that was predominantly white, “you ran.”

“Those people weren’t wealthy,” she says;, “their wealth was that they were white.”

The Times spoke with Yance Ford this week while he was in New York, and before he headed to the Vineyard for the film festival. Yance graduated from Hamilton College in upstate New York, and went on to be a longtime producer for the PBS documentary series “POV,” a job he gave up to complete “Strong Island.”

“It was important to establish what our family looked like before he [William] died,” Yance said. “Part of the draw of the film is that my family looks like everyone else’s family.”

Yance explained that his parents were of a generation that faced the “violence of the South,” and their response to it was to hold their heads high and to “face violence with dignity and to combat discrimination with education.”

“Both of my parents emerged from the South having gone through this gauntlet, and determined that their children would live the American dream in their lifetime,” he said. His family moved from Brooklyn into a suburb in Central Islip on Long Island. His father, William Sr., drove the J train for the Transit Authority in New York, and in the film Yance says his father saw a very different city than his mother did, one filled with poverty, crime, and violence.

“My father was not a fearful man, he was a realist,” Yance tells the camera in “Strong Island.”

Ironically, at the time of his death William Jr. was working diligently on losing enough weight to be eligible to train for a career in law enforcement. Even more of a paradox, on the morning of the shooting, William had testified in a court case where he had chased down a man who had shot someone at an ATM in Brooklyn.

“He was the star witness for the prosecution,” Yance said. “I think it’s a unique experience for black American men … in Brooklyn you’re a hero, and in Long Island you’re a menace.”

The grand jury in William Ford’s own case didn’t return a true bill, meaning that their decision was that there was not enough evidence to charge Mark Reilly with any crime. Yance said his brother became the suspect in his own death, based on the testimony or statement of one person, Mark Reilly: “The one person that had the most to gain by having my brother perceived as dangerous and out of control and to be feared,” Yance said. “Nobody investigated the reasonableness of his [Reilly’s] fear.”

In the film, William is spoken of as a big guy, intimidating.

“My brother wasn’t big, he was obese,” Yance said. “You listen to person after person describe him as a big guy, an intimidating guy. He was 5 feet 8 inches and obese. You begin to understand how facts and forensics take a backseat to fear when a black body is involved. When in fact he had been starving himself for 32 days to make weight for the Department of Corrections. He had chicken soup and Tylenol in his stomach the night he died. The coroner’s report ran every single drug test on my brother, and everything came back negative. When you juxtapose fact and fear, fear always comes out on top.”

“Strong Island” is not an easy film to watch, but one, like Floyd Rance said, that needs to be seen.

“Strong Island” screens at the Performing Arts Center on Saturday, August 12, at 3:30 pm. For the full schedule of films and events, visit mvaaff.com.