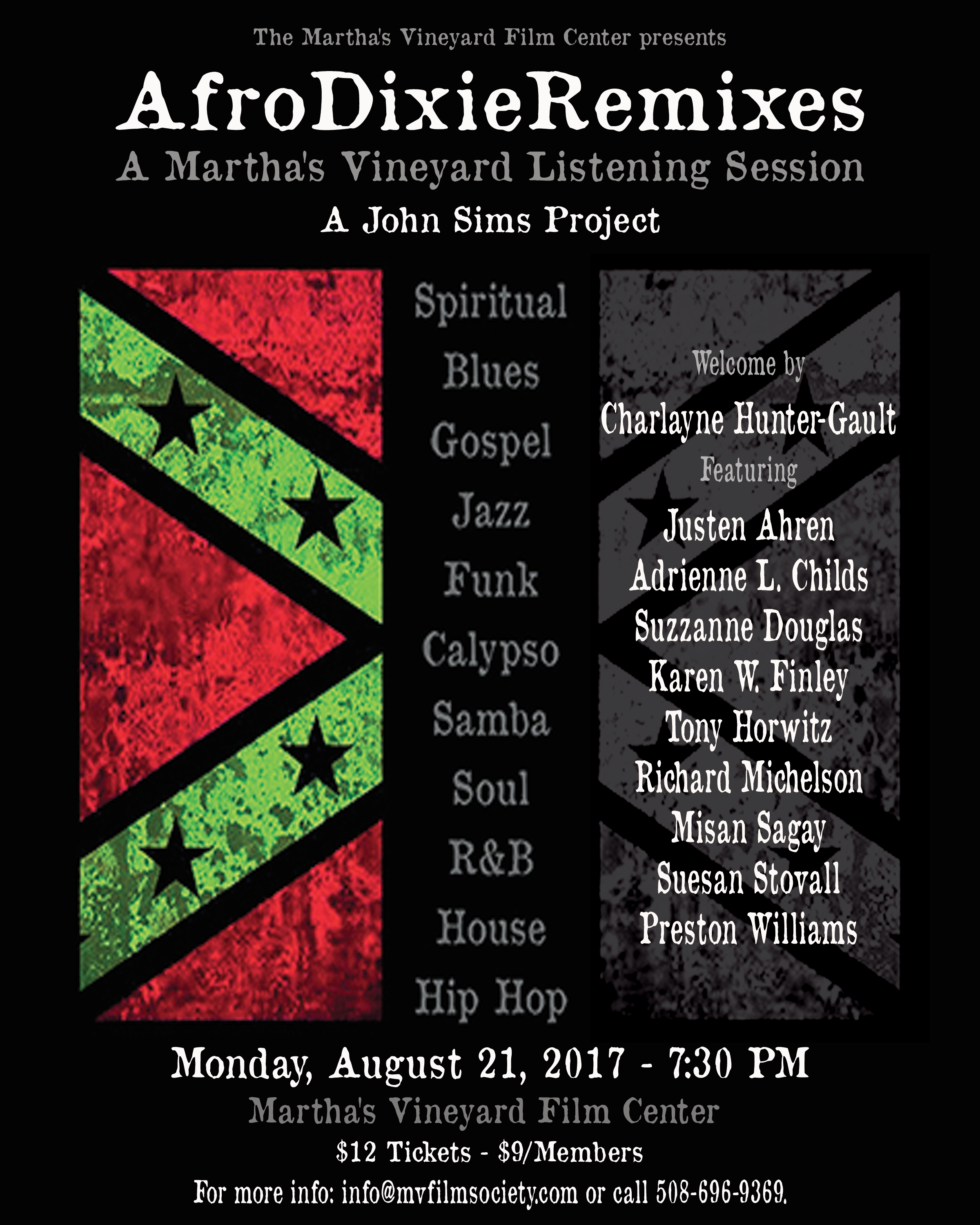 “The AfroDixieRemixes: A Martha’s Vineyard Listening Session” comes to the Martha’s Vineyard Film Center on Monday, August 21. It is one of a series of musical events created by multimedia artist and producer John Sims. In it, multiple African American music genres take what has become a traditional Southern song in unprecedented directions. The goal is to recapture the song’s African American roots by listening and responding to it.

Sims says of “AfroDixieRemixes”: “While it’s not my impulse to erase this curious tune — completely — I am drawn to reimage it through the speakerphone of black music, to make the point that the African American experience is central to any notion of Southern heritage.” Aiming to take the performance to all 50 states, Sims said he’s hit seven so far.

Originating in the mid-19th century North as a blackface minstrel song, “Dixie” started out as pro-slavery. Its opening lines, “Oh, I wish I was in the land of cotton/ Old times there are not forgotten,” illustrate the point. The name “Dixie” comes from the French for 10, used by French speakers in New Orleans for a $10 note.

A group of Sarasota, Fla., musicians perform on the 14 tracks to demonstrate the importance of “Dixie’s” black contributions. The genres used are spirituals, blues, gospel, funk, calypso, samba, soul, R&B, house, and hip-hop, each with a distinctive interpretation of “Dixie.” Sims points out that while white Americans enjoy and value black music, they are far less interested in and respectful of black history.

Author and journalist Charlayne Hunter-Gault, who was instrumental in helping Sims bring the performance to the Vineyard, will introduce the session. “I’ve known [Sims] from Sarasota, Fla.,” she said in an interview last week, “and I thought the Vineyard would be a good place to show his work.” She added that the event is a great way to engage different perspectives, and offer an opportunity for good constructive discourse: “We need that now more than ever.”

“There are many folks I know in Sarasota who summer on Martha’s Vineyard,” Sims said in a recent interview, “so it makes sense that Martha’s Vineyard would get on the ‘AfroDixieRemixes’ schedule at some point.” One of Sims’ film shorts played in an earlier Film Center International Film Festival. Music videos will be included on the program. “For Martha’s Vineyard, this will be the first time I am presenting in a proper film theater,” he said. “Also, the participating group is truly one of a kind.”

For information and tickets for films and events at the Film Center, see mvfilmsociety.com.