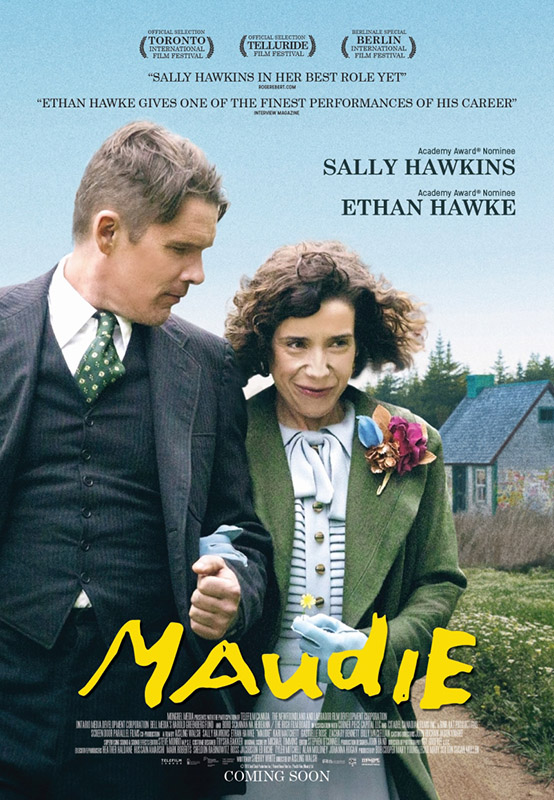 Two movies playing this week feature two very different women. “Maudie,” starring Sally Hawkins and Ethan Hawke and playing at the Capawock, Strand, and the Film Center, is a delight. On the other hand, “Lady Macbeth,” starring Florence Pugh and opening at the M.V. Film Center, is a creature as compellingly devilish as Shakespeare’s heroine. Also playing is the documentary, “I Know a Man . . . Ashley Bryan.”

Based on a true story, “Maudie” stars the remarkable Sally Hawkins as a Nova Scotia woman who suffers from rheumatoid arthritis. Hawkins was nominated for a Best Supporting Actress in “Blue Jasmine” (2014) and is best known for “Happy-Go-Lucky” (2008). Maud takes a job as a housekeeper for an antisocial fishmonger, Everett Lewis (Hawke), and begins developing her talent as a folk artist. Everett, who was brought up in an orphanage, gradually softens his hostile behavior, becoming as devoted to Maude as she is to him. Eventually he agrees to marry her.

“Some people don’t like it if you’re different,” Maude tells him, but rejection doesn’t faze her. She decorates Everett’s house with depictions of flowers, birds, and animals. A New York woman named Sandra (Kari Matchett) starts buying her work, encouraging Maude to sell it to others, and the budding artist becomes a big success. The real Maude Lewis continues to be one of Canada’s best-known folk artists.

“Lady Macbeth” is adapted from Russian author Nikolai Leskov’s 1865 novella, which was made into an opera by Dmitri Shostakovich. Despite its title, the film is not an adaptation of Shakespeare’s play. Instead the movie’s character is a version of the femme fatale, about as far from a Jane Austen character as imaginable.

Viewers meet Katherine (Pugh) as a 17-year-old entering an arranged marriage with an older man, Alexander (Paul Hilton). The era is 1860, and the place, England’s rural Northumberland. Katherine’s disagreeable husband has no interest in consummating the marriage, while his equally unpleasant father, Boris (Christopher Fairbanks), treats Katherine as nothing but a potential breeder.

Trapped in a loveless marriage and confined indoors, Katherine has little to do or hope for. Her clothes help portray the extent of her confinement. Katherine is dressed daily in a tight corset and a hoop skirt by her black maid Anna (Naomi Ackie), who acts as a foil for her mistress. Director William Oldroyd further illustrates Katherine’s dilemma with balanced shots of her. She sits, centered on a settee, most often in an elegant blue gown, her voluminous skirts spread around her, the expression on her beautiful face impassive.

Everything changes when she plunges into an adulterous relationship with the estate’s groomsman Sebastian (Cosmo Jarvis). Their passionate affair liberates Katherine, but hardly in positive ways. Her attempts to maintain the relationship with Sebastian lead her into behavior that can only be described as evil. Despite its liberated heroine, “Lady Macbeth” is no feminist tale. It is a female gothic horror story outfitted in 19th-century trappings.

Playing once on Thursday at the Strand is “I Know a Man . . . Ashley Bryan.” This documentary portrays the 92-year-old artist, who lives on Little Cranberry Island in Maine, who promotes the positive and works to create a sense of community while exploring the mysteries of faith. The School Library Journal says, “Students of art and children’s literature will be inspired by this celebration of the man’s work and his life.”

Information and tickets for these and other films at the Film Center, the Capawock, and the Strand, see mvfilmsociety.com.