The morning 9-year-old Oliver Ames met former President Obama, he was checking owl boxes at Farm Neck with his grandfather, Michael Zoll. Back when Mike was head pro there, Mike and Gus Ben David and his crew had put up the owl boxes and some osprey poles. Mike and Oliver, son of Eden Zoll and Jason Ames, had been going over to the course every morning while Oliver was on the Island visiting from Portland, Maine, to hit a few balls and check the owl boxes. Last Thursday, as they opened one of the boxes, two barn owls flew out. Barn owls are fairly large and have pale, distinctive heart-shaped faces. Since they hunt mainly at night, it’s rare to see one, much less two. Mike and Oliver checked on the identifying characteristics of the owls in the “Sibley Guide to Birds” they had brought with them.

Shortly after that, Mike and Oliver were sitting on a bench when Mr. Obama came along to tee off. Mike had been head pro during the time Mr. Obama was president, so when one of the Farm Neck employees pointed out Mike and his grandson, he asked to meet Oliver.

Mr. Obama shook Oliver’s hand, asked him how old he was, and told him he liked his T-shirt, which had fireflies and various bugs printed on it. He asked Oliver if he liked bugs (yes) and if he wanted to study science. There was an enthusiastic “yes!” from Oliver, who says he wants to be an “inventor slash scientist slash marketer.” Mr. Obama then asked about the Sibley’s bird book under Oliver’s arm. When Oliver told him about the barn owls, Mr. Obama asked to see them in the book. Oliver looked owls up in the contents, found the page, and then he and Mr. Obama had a discussion about the differences between the ones Oliver had seen and the ones in the book.

It turns out this was not the first president Oliver met last week. Two days earlier he and his grandfather had seen Bill Clinton on the course. Mike had been head pro when Mr. Clinton was president, too. Mr. Clinton also shook Oliver’s hand, asked him how old he was, and told Oliver he liked his T-shirt (a different one that day — tie-dyed).

Oliver was in a good position to compare presidents and being Oliver, he gave some thought to the question of how the presidents were different. First of all, the handshake: Mr. Obama’s was “more formal, stiff, and straight up and down.” Mr. Clinton’s was “more up-down, up-down, up-down.” Also, Oliver found Mr. Clinton to be more “peppy” while Mr. Obama was “peppy, too, but more formal.” As to what he would’ve asked Mr. Obama, Oliver says, “I’d probably ask him what it was like to be a president. Was it fun? Was it stressful? Was it annoying? Was it — Oh my God, I’m the president of the United States!?” As for Mr. Clinton, Oliver says he’d ask, “Do you miss being the president or are you kind of relieved? Like, ‘I’ve done the president thing and I’m kind of glad to be done with the stressfulness.’”

Oliver is a self-described geek, which he likes, as far as having that kind of knowledge. While he was on the Island, he gave what he called a “basic technology tutorial for all Apple mobile devices” to five family and friends of his grandparents in which he explained how to use the control center and Siri, and answered individual questions. Oliver enjoys science and math, and will be on the e-team at his school this year, helping the technology teacher to update the school’s technology devices. After school, he enjoys playing with his friends, and goes to the beach with his mom, where he likes “playing in the sand, talking, and sometimes reading a book.” This is Oliver’s first year playing golf, and he really likes it.

Oliver is a combination of wise elder and kid. He said he was nervous meeting the presidents, but later, when asked about what he did at the golf course with his grandfather when they went every morning, Oliver quipped, “Just normal golf stuff. Every morning I play golf. I meet presidents.”

The encounter with the two presidents was life-changing for Oliver, though. He said he’s more likely to become a scientist now that he told Obama he wanted to be one. He says, “I feel like, at least every day, I’m going to think back — wow! I met President Obama and President Clinton. That’s just amazing!” When his mother says, “Two owls; two presidents. Both unusual,” Oliver thinks so, too, and says, about the owls, “One should be named Clinton and one Obama.” 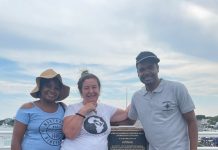 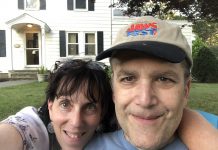