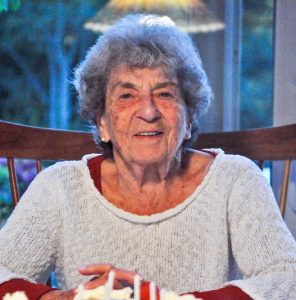 Sarah Isenberg died on August 2, 2017, at the Windemere Nursing and Rehabilitation Home. She would have been 100 years old on her birthday.

Sarah was born Sept. 6, 1917. She was the daughter of Solomon and Bella Sviridoff, who emigrated from Russia. She was the oldest of her four siblings, who were the first generation to be born in this country. Sarah lived most of her life in New Haven, Conn. As a child, her family moved to Brooklyn for a short time to live with cousins during the Depression. She graduated from Hillhouse High School and the Grace New Haven Hospital School of Nursing, setting the stage for a life devoted to caring for patients and a commitment to issues of social welfare and public health.

In New Haven, she worked as head surgical nurse at Grace Hospital, as a school nurse, and as a visiting nurse in the Hill section of New Haven. In 1970 she became director of discharge planning at the West Haven Veterans Administration Hospital, which was affiliated with Yale Medical School. While in New Haven, she served on the board of directors of the Connecticut Hospice, and saw the opening of the first hospice in the county in Branford, Conn. Still working full-time, Sarah returned to pursuing her education evenings, earning her bachelor’s degree in nursing from the University of Bridgeport and her master’s degree in gerontology from Southern Connecticut State University in 1981.

Sarah began visiting Martha’s Vineyard in 1960, moving to the Vineyard permanently in 1985 and settling in West Tisbury. She was the director of Hospice Martha’s Vineyard from 1985 to 1995, a position she held until she was 80 years old. At that time Sarah worked closely with Island clergyman John Shule to develop the strong volunteer program which exists today.

A role model to many, Sarah had a fierce commitment to social justice, and was deeply involved in the communities where she lived. As a child of the Great Depression, she approached the obstacles in her life with grit and perseverance, resolving to bring beauty and pleasure into life’s most mundane moments. She valued the peace and beauty of her life on Martha’s Vineyard: her small home in the woods and the gardens that surrounded it, daily swims in Lambert’s Cove, bike rides on the bike path, lobster rolls in Menemsha.

Her care, her wisdom, her wit, and her love were well known, from New Haven to Martha’s Vineyard and beyond. Sarah will be missed by all who knew, loved, and respected her. May her memory be for a blessing.

Sarah was predeceased by her husband, Seymour P. Isenberg, her brothers, Mitchell and Harry Sviridoff, and her sister Helen Spector. She is survived by her son Michael Isenberg and her three daughters, Sally Cohn (George Cohn), Nancy Isenberg, Laura Isenberg (Mark Byers), and her seven special grandchildren and 11 beautiful and very special great-grandchildren.
A private funeral was held at the Martha’s Vineyard Hebrew Cemetery. Donations in Sarah’s memory may be made to the Martha’s Vineyard Hebrew Center Tzedakah Fund, Hospice of Martha’s Vineyard, and the Windemere Nursing and Rehabilitation Home.