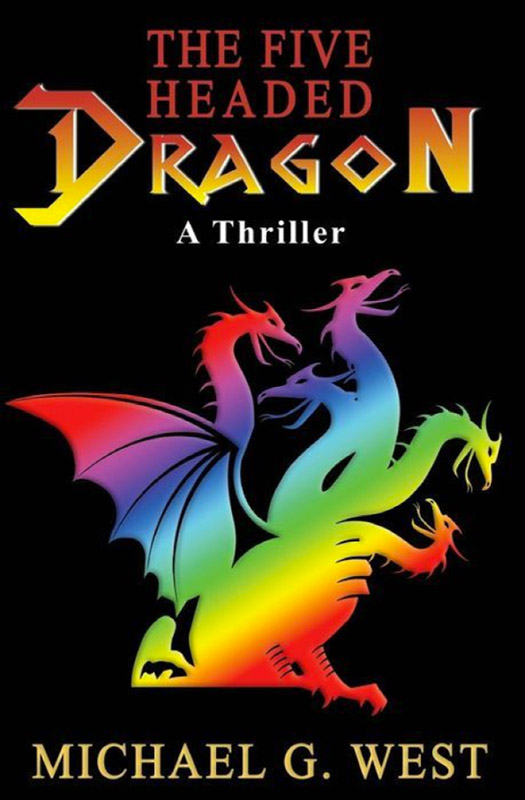 Michael G. West, who lives year-round in Vineyard Haven, with a whole lot of business travel to keep his horizons broad, never does anything by half-measures. We’ve been friends for years, and I recall a time some seasons back when he decided to clean up his health regime. All at once he gave up smoking, drinking, meat, and dairy, and took up the plant-based diet of raw food, which calls for hours of prep time.

He’s since returned to a more mainstream nutritional plan, at least judging by the characters in his engaging new thriller, “The Five-Headed Dragon,” where a lot of perfectly grilled steak is consumed, along with elite wines.

But we’re getting ahead of ourselves. Michael works one of those high-tech jobs that you might hear about in passing; he’s a program planner, industry analyst, and strategy consultant in several countries and on both coasts in the U.S. Except for those previously mentioned travel trips, he manages all this from home.

This means that if he puts in that little extra measure of arising at 5 am, he can spend an hour writing a new book. So far he’s racked up two Tommy Shakespear mysteries, three Martha’s Vineyard “Eco Thrillers,” and four collections of poetry. He self-publishes because he knows what he wants and how to get it right.

Now comes an entirely new startup thriller, the one with the dragon and the five heads, featuring a hit man with a conscience, Leef Leiden, who lives on an unnamed island retreat and who accepts assignments only if his clients can provide documentation of the target’s psychopathic tendencies. He’s a little like that other lovable killer of sociopaths, Dexter, from the TV series of the same name, developed from the delightful novels by Jeff Lindsay.

Back to Leef the assassin: His cover story is his professorship as an expert on “Sarasvati: Hindi origins of the Japanese Buddhist goddess Benzaiten.” If this sounds esoteric, it makes an exquisite backdrop to Leef’s cunning executions, such as preparing a bad girl’s demise on her third-floor deck above a Malibu cliff, spread with 10,000 tiny ball bearings lubricated with mineral oil. His cleanup crew is a trusty gang of Hell’s Angels.

As his nemesis and emerging love interest, young Sarah Benton is a hotshot investigative reporter who’s busy tracking an odd pattern: murders without the corpses to show for them. As she begins to home in on Leef, he in turn falls in love with her, and a supremely sticky and tricky relationship fills out the story. The love story falls between clever murders of archfiends who deserve a harsh reckoning, and lush descriptions of just-so cuisine for the refined hit man and academic. This home-cooked meal, for instance: “Egg-battered shrimp in a mix of chia, sesame seeds, and panko, seared in a dry frying pan heated to 500° in the oven.”

When he’s not eating, Leef is romancing two women on his island retreat, even as he pines for Sarah and awaits his next assignment, both to lecture and to murder. As you can imagine, this book is a feast for the senses, with a turbo-propelled plot. If you’ve never read a Michael West thriller, do so now, starting with “Five-Headed Dragon,” then working backward, then waiting eagerly for the next romp.

Also of great interest in the new Island books self-publishing department: Keep an eye out for “There’s Something About the Vineyard” by C.A.T. O’Daly, a.k.a. to the hordes of us who know her Carolyn Thomas O’Daly of Edgartown, humor contributor to Martha’s Vineyard Magazine. You’ll pick up this book and read the first essay, “A Question of Doorbells.”

“Before moving to Martha’s Vineyard in May of 2000, doorbells were a topic I don’t believe I had ever thought about. In fact the only time I can say I consciously considered the matter was the year my friend Dickie received, as a gift from his children, an electronic doorbell that played eight different tunes.”

You see what’s happening here? You won’t be able to stop compulsively turning the pages, through stories of “Beach Wagons, Ho!” “Booty and the Beast” (about seagulls on South Beach who swoop down and steal your hoagies), Vineyard newspapers, and pilfering from the rich via auctions, “silent or otherwise.” It’s all great fun, only 171 pages with large print (always a pleasure), and if you take it to South Beach, sans hoagies, you’ll finish it all before you empty the sand out of your picnic blanket.