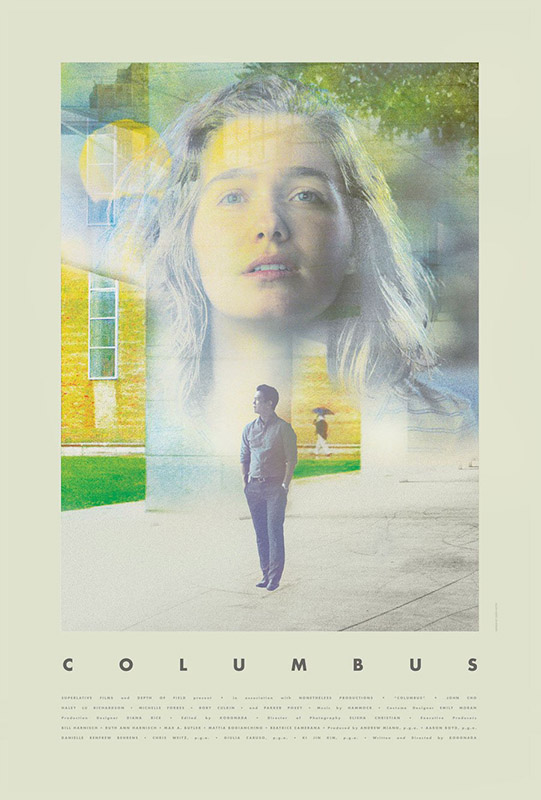 “Columbus,” a quietly eloquent film, comes to the Martha’s Vineyard Film Center this weekend. Directed by Kogonada (a pseudonym for an unnamed Korean-American filmmaker) in his debut feature, this film won a Special Jury Prize at the Independent Film Festival of Boston.

The film’s Columbus is a small Indiana town, known as the “Athens on the Prairie” because of its modernist architecture. It is home for seven National Historic Landmarks, including four buildings by Eero Saarinen, and others by I.M. Pei and Robert Venturi, all world-famous modernist architects. It is also the birthplace of Vice President Mike Pence.

It is important to understand the emphasis on these buildings, because “Columbus” is seeped in the city’s architecture. Influenced by celebrated Japanese director Yasujiro Ozu, Kogonada employs the East Asian style of filmmaking with its emphasis on subtlety, setting, and a still camera. The director has created an album of exquisite stills that the viewer is invited to slowly absorb.

The narrative that accompanies image after image of modernist buildings relies on the central characters’ discussions of the city’s architecture. It includes Saarinen’s First Christian Church, the first Modernist religious building; and his Irwin Union Bank, the first financial edifice to use glass and an open floor plan. The Cummus Foundation, created by Columbus’s diesel engine manufacturer of the same name, funded this remarkable collection of buildings.

Underlying their discussions of the city’s architecture are the central characters’ personal issues. Casey, compellingly played by Haley Lu Richardson, is a recent high school graduate who works shelving books at the local library — a modernist building designed by Pei — and she has a passion for architecture. She meets Jin, played with equal effectiveness by Korean-American actor John Cho, over shared cigarettes. They strike up an unusually passionate platonic friendship based on the troubled relationship each has with a parent, as well as their passion for architecture.

Casey’s mother Maria (Michelle Forbes) is a recovering meth addict whom Casey feels she must stay with and support. A translator, Jin has come to Columbus from Korea to be with his father, a renowned architecture professor, who has collapsed and is in a coma. Following Korean tradition, Jin must remain in Columbus until his father recovers or dies. Jin resents being held captive by his neglectful father’s illness. As Eleanor, a colleague of Jin’s father, Parker Posey plays a role in both Casey’s and Jin’s lives.

Although Jin resists her enthusiasm, Casey regales him with visits to her favorite buildings. Kogonada frames their conversations before beautiful, static backgrounds of the city’s wonders, including the striking Large Arch by Henry Moore. The viewer cannot help but see the connection between the buildings and the characters. Yet the director pares down the narrative to a minimum, sometimes leaving the viewer wondering what those connections are.

In addition to the city’s architecture, Kogonada creates perfectly composed interiors, including hallways with multiple doorways and mirrors that capture the characters’ faces. Backlit portraits of Casey and Jin enhance many scenes. The handsome buildings’ perfection is contrasted with the more imperfect characters. The viewer cannot help but notice, for instance, that Casey is often depicted with a blotchy face.

Filmgoers not used to the approach to filmmaking of many of the great East Asian directors may find “Columbus” a challenge. It is one well worth the effort.

For information and tickets to “Columbus” and other films at the Film Center and the Capawock Theater, see mvfilmsociety.com.