The old S.B.S. grain store on Water Street, Vineyard Haven, was a longtime side business of the successful grocery enterprise of Smith, Bodfish, and Swift, a company formed in 1910 from the merger of three small Vineyard Haven grocers.

But the grain business and building are considerably older. West Tisbury grocer William Rotch began selling wholesale grain on this Water Street site about 1875 as an extension of his booming West Tisbury general store business. The extant building dates to 1881 or earlier, and was one of the few survivors of the great 1883 fire which destroyed almost all of downtown Vineyard Haven. Rotch sold grain, corn, flour, and animal feed here, and ran a steam-powered grist mill on the site. (Rotch’s political life kept him from spending too much time at the mill personally — he served as West Tisbury selectman for 38 consecutive years.)

In 1906 the business was sold to the grocery firm of Bodfish & Call, which then fell under the unified ownership of S.B.S. about 1910. (“Soak ’Em, Beat ’Em, and Skin ’Em,’ we used to call it,” recalled late Vineyard Haven resident Stan Lair.) They sold hay, grain, feed, and poultry and farm supplies here for the better part of a century. In 1922, the building was raised several feet to protect it from rising ocean waters.

During much of the early 20th century, Edward Dahill served as manager of the grain mill, and Curtis Athearn was the store’s clerk. Lair recalled, “[Athearn] was a strong person. He could throw those big [100-pound] bags of grain around like they were full of air. He was pretty rugged.”

Athearn’s full beard was unusual for his day. Ralph Look remembered, “He wore a beard to protect him from all that grain dust.” Lair recalled differently: “Curtis thought he was a great bass singer. I guess he did have a fairly decent voice. He used to sing in the Baptist Church choir, and all sorts of plays. Anyhow, he grew a beard, and he always claimed it was to protect his throat. In his business, why a beard was sort of a detriment, because in a grain store there was always a lot of dust. Poor Curtis’ beard always had sort of a gray tinge to it. But anyhow, in those days a bearded young person was a rarity.”

In 1936, Dahill incorrectly prepared a formula for rat poison. The chemicals exploded, and set fire to the mill. “The rats,” according to the Boston Globe, “instead of being exterminated by the gas of the preparation, caught fire and ran about the mill setting many blazes.” The explosion blew out windows and doors, and caused nearly $18,000 in damage to the two-story building, filled with grain, seed, and farming implements. There were no human injuries, but the firemen were forced to remain outside, as they were unable to withstand the fumes even with gas masks. “Spectators were amazed to see rats with their fur afire running madly about the building.” 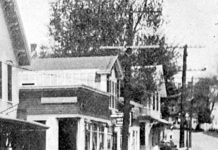 This Was Then: The Barber of the Black Second

A culture of cheese at Grey Barn