Dennis Alan Bergstrom died at the Hospital of Central Connecticut in New Britain, Conn., on Oct. 13, 2017, his body simply too tired to continue fighting the health issues that had come to plague him. He was laid to rest in the State Veterans’ Cemetery in Middletown, Conn., surrounded by a small gathering of family and friends in an intimate ceremony. 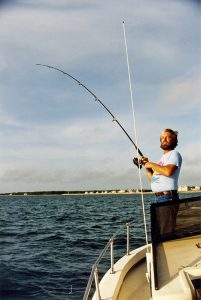 Dennis was born in San Juan, Puerto Rico, on Dec. 2, 1946, where his father was stationed in military service. While he was still very young, the family relocated to the mainland, and settled in the area of Ellington, Conn. This is where Dennis spent most of his growing years, being raised by his mother Betty Jane, his grandmother Rachel Pease, and his grandfather Edgar Pease, whom Dennis always remembered fondly as the man who taught him all he knew about life and how to be a good man. These years were spent on the family farm, surrounded by animals and the outdoors, and this is where Dennis developed his incredible resilience and keen ability to tackle anything he was called upon to do.

Following high school, he attended the Ward School of Electronics in Hartford. And then, as were many young men in that era, Dennis was drafted into the Army. The year was 1967, and Vietnam was the destination. He began his tour of duty in combat infantry, ultimately training and serving in helicopter recon and recovery of fellow troops trapped and/or injured and surrounded by enemy combatants. He was honorably discharged in 1969 with medals including those for Good Conduct and Sharpshooting. And even all of these years later, he was known to still shed gentle tears when remembering some of the names and faces of those who did not return home, those young men who had always had each other’s backs and who always did their best.

In 1991 Dennis decided to relocate to Martha’s Vineyard. He had always been an avid fisherman, boater, and all-around outdoor enthusiast. What better spot than an island surrounded by water and the best fishing on the New England coast? While establishing a new life on the Vineyard, Dennis worked hard at perfecting his skills as a carpenter, and could always be called upon to lend his talents to friends in need of assistance. Outside of his work, there was a boundless, boyish enthusiasm for everyone he met and everything he did. And he was only too happy to be the first one on his feet to dance.

In recent years, Dennis returned to Connecticut to care for his mother. Her health was gradually failing, and he felt that was where he needed to be. So it is where he stayed until she died in May. Although his plans might have been to perhaps come back to the Vineyard, it seems that his own health and circumstances prohibited his return.

He is survived by his much loved sister Karen Bergstrom of Boynton Beach, Fla. And there are several aunts, uncles, and cousins still in the Connecticut area. But beyond those family connections, there are also endless friends, both here on the Island and in his home state, who will always remember Dennis for his infectious energy. For his love of good wine. For his knowledge of the winds and waters. For his naughty-boy personality and sense of mischief. For his spirit of adventure and travel. For the joy he found in four-wheeling his truck along the beach. For his ability to figure out and fix anything. For his love of country music. For his mastery of the Weber grill. For his appreciation of a good time. For his determination to soak up every bit of life and to live it on his own terms. Yes: He will be remembered for all of the good things.

And with the words to one of his many favorite songs: