For nearly all her life Ruth Epstein has created art in some form or other. She was a weaver, a sculptor, a textile artist, a photographer, a maker of art dolls, an interior designer, and now she creates collages. But not just any collages. Mrs. Epstein, who’s 92, brings a collection of materials together to tell a story, sometimes a story of hope and other times a story of sorrow. The West Tisbury library will host an exhibit of her work throughout November, with an artist’s reception on Saturday, Nov. 4, from 3 to 5 pm. The exhibit will include collages, some art dolls, and a piece or two of Ms. Epstein’s alabaster sculpture.

Mrs. Epstein moved into her daughter Lisa’s guest house in the woods in West Tisbury in 2009, and says the lighting in the little house is perfect — she works there assembling the intricate pieces of paper, fabric, photos, and other items she uses in her artwork. Her first collage was actually a postcard that she sent to friends and family announcing her move to the Vineyard. She’s come a long way since then.

Now her collages include one commemorating her late husband’s life, another with the heading “The Strudel Queen,” which acknowledges her mother’s love of cooking and baking, and an evocative collage depicting the effects of the Holocaust on her family. Mrs. Epstein’s mother arrived in the U.S. in 1920 when she was 21, working and sending money to her family back home in a little village in what is now Belarus. Using photos and family letters written in Yiddish found in an old shoebox, Mrs. Epstein created a collage with her grandmother, whom she never met, as the centerpiece. Halfway down the collage is chicken wire with scraps of red cloth tied to it, representing concentration camps like Auschwitz-Birkenau and Stutthof.

Lately Mrs. Epstein has focused on finding out what actually happened to her grandmother. She wrote to Yad Vashem, the World Holocaust Remembrance Center, to see if they had any information about the village where her grandmother lived.

“I wanted to know what it was like in my grandmother’s town before the Nazis rolled in, and how they did the killing. I’m the last person in my family who knows all of this, and I wanted to do the research for my own family and to leave that legacy,” Mrs. Epstein explained during a recent conversation with The Times.

“They answered me immediately,” she said. “They told me there was a woman from my grandmother’s town and she wrote a memoir, and for $12 they would send it to me.”

The person who wrote the memoir was Rivka Yosselevska, a woman who survived a mass killing of Jews in the same little village in Poland where Mrs. Epstein’s grandmother lived. Her daughter Lisa helped her with research using the Internet, and what she found out about Rivka truly astonished the two women.

The memoirist was a witness at Adolf Eichmann’s trial in 1961. Eichmann orchestrated the logistics behind the deportation of Jews and Romani to ghettos and extermination camps. The Israelis found Eichmann in Buenos Aires and transported him to Israel, where the trial took place. (According to the U.S. Holocaust Memorial Museum website, the Eichmann case is the only instance where Israel enacted a death sentence. He was executed by hanging on June 1, 1962.)

Mrs. Yosselevska’s graphic testimony describes how she lost her parents, grandmother, sister, and her 7-year-old daughter. Around 500 Jews were rounded up from the small village and forced into a ghetto. In August 1942, the Nazis came and forced them outdoors for a roll call, where they stood for an entire day while they were grilled about the location of their valuables. (Rivka wrote that there were no valuables left.) After that, they were loaded onto trucks (those who didn’t fit on the trucks were ordered to run behind them) and driven outside the ghetto to where trenches had been dug. Then they were stripped naked, lined up, and shot, their bodies falling on top of each other in the trenches. Rivka relates how her daughter was taken from her arms and shot, and how she longed to die with the rest of them. She was shot in the head after her daughter, but somehow survived. She dug her way out of the pile of bodies, some still alive. The Nazis came back the next day to finish off those still clinging to life, and inexplicably, Rivka was left behind.

“Rivka was shot by the Nazis but didn’t die,” Mrs. Epstein explained. “She crawled out and stayed there for three days, until a farmer came by and picked her up. She lived in the same town as my grandmother. She crawled out of the pit. She eventually got to Israel, and that’s why she was there when the trial came up.”
Rivka survived in the woods until 1944, when the Soviet soldiers came.

“What I found out when I followed Rivka … that told me how me how my grandmother died,” Mrs. Epstein said. “When you hear these stories you can’t immerse yourself in it, you have to move back, or you get so emotional that you can’t process the story.”

Mrs. Epstein has printed Rivka’s story and her testimony, and will pass the information on to her children and grandchildren. Her collages, one titled “Coming to America” and the other “Jewish Communities Before the Holocaust,” illustrate through photos and textiles the journey of the Jewish people in Europe and Russia.

Monina von Opel, curator of the art collection at the Martha’s Vineyard Hospital, acquired the original “Coming to America” collage, and it hangs near the gift shop at the hospital. She provided Mrs. Epstein with a giclėe print of the piece, which will be part of the library exhibit.

Not all of Mrs. Epstein’s large (28 x 38 inches unframed) collages depict historical events or attempt to convey messages; some are simply pleasing to the eye because of the colors and arrangement of the items she’s managed to bring together. “A Rose Is a Rose Is a Rose” is a lovely crimson-hued collage with an oval portrait of a beautiful woman circa 1875 in the center; a collage of angels hangs above Mrs. Epstein’s sofa.

For the first time, she is considering putting a price on her artwork.

“It’s like your babies,” Mrs. Epstein said. “You have a very personal feeling about what you do. I’m very fortunate that I have the ability to do this at my age instead of sitting in a rocking chair. It’s not your usual cup of tea, but it is what it is.”

Ruth Epstein’s artwork will be on exhibit throughout November at the West Tisbury library. Meet the artist at a reception on Saturday, Nov. 4, from 3 to 5 pm. 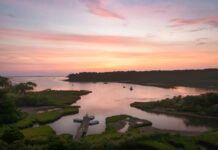 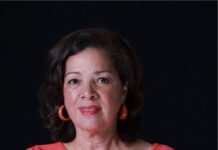 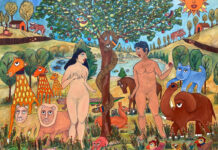