Ikuko Kawai Burns, sculptor and seasonal Island resident, died peacefully in her Brookline home on Oct. 8, 2017, after succumbing to the cancer she valiantly battled for months. 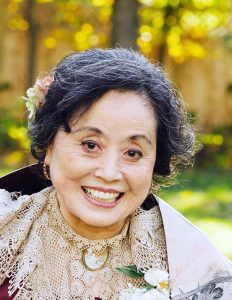 Ikuko Kawai started her life in Tokyo, Japan, at the very beginning of 1936. She was proud to be a New Year baby, as oshogatsu is a particularly auspicious day in Japan. The youngest daughter of a family of seven (with three elder sisters, a younger brother, and gentle and loving parents), Ikuko’s earliest years were spent under the influence of World War II and the American Occupation of Japan.

Because of the threat of bombing in Tokyo during the war, Ikuko and her parents moved back to their ancestral home, in the north in the city of Yamagata, where she later attended university, earning a bachelor of arts in American literature. It was during her senior year at Yamagata University in 1957 that Ikuko met her future husband, Dr. Padraic Burns, on a ski vacation with friends.

After graduation, Ikuko went further north to become a television and radio announcer at Hokkaido Broadcasting Co. (HBC) on the northernmost island of Japan, Hokkaido. In November 1959, she and Padraic were wed in Tokyo, and just one week later moved to New Haven, Conn., where Padraic had attended medical school, and two years later to Boston, where she attended the Museum School at Boston’s Museum of Fine Arts and launched her career as a sculptor. Ikuko held art exhibitions in both the U.S. and throughout Japan. Her work with the Japan Society of Boston, the International Women’s Club of Boston, and the Hokkaido Massachusetts-Hokkaido Sister State Association spans the decades she lived in the Boston area. She housed and entertained newcomers and old friends alike in both Brookline and the Vineyard. She had a voracious appetite for life, food, friendship, and fun. Most any new Japanese arrival to Boston was soon introduced to Ikuko and her gracious hospitality.

Ikuko first came to the Island in the late ’50s, shortly after arriving in the U.S., visiting dear friends Broni and Annie Lesnikowski on Hines Point.

Ikuko had an appreciation for the deeply romantic gesture, an unquenchable thirst for adventures large and small, an infectious joy that drew people together. She was creative in all areas of her life: sculpture, cooking, housekeeping, and friendship-building. Everyone marveled over her energy.

Ikuko Burns was awarded the Foreign Minister’s Commendation in 2012, “in recognition of her significant contribution in promoting mutual understanding between Japan and the United States.” Her passion for living, for friendship and family, and her creativity, compassion, and generosity will be remembered and sorely missed by all.

She leaves behind her beloved husband of 58 years, Dr. Padraic Burns, her son and daughter-in-law Kenneth and Kallianne Burns of Brookline, her daughter and son-in-law Amelia Burns and David Levine of Carlisle, her daughter and son-in-law Margaret Burns-Rath and Richard Rath of Alexandria, Va.; and her beloved grandchildren, Julia, James, Elinor, and Brentan. A memorial and celebration of her life is scheduled for Saturday, Jan. 6, 2018, at noon (snow date: Sunday, Jan. 15, 2018) at Showa Women’s University Rainbow Hall, 420 Pond Street, Boston, MA 02130. In lieu of flowers, donations in her name may be made to Massachusetts-Hokkaido Sister State Association (Kiyoko Morita, President, Massachusetts-Hokkaido Sister State Association, 37 Fair Oaks Park, Needham, MA 02492) or to Japan Society of Boston (japansocietyboston.org/donate). As a symbol of Ikuko’s love of beauty and romance, guests are encouraged to each bring a single red rose to the event.