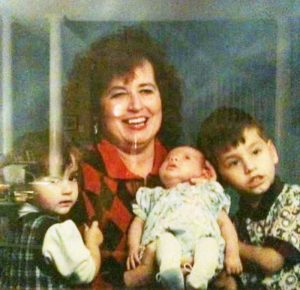 Sandy was born on August 10, 1949, to Doris E. Rowand and Eugene G. Hehl. Sandy was the oldest of three children with sister and brother Deborah Hehl Eppinger and Theodore Hehl. She attended a vocational high school where she studied cosmetology and hairdressing, and met her husband Steven, or Steve for short. Sandy and Steve were married in 1968. This year they would have celebrated their 49th anniversary on Thanksgiving.

During their early years of marriage, they had two children, Kim and Tessie. The family lived in Haddonfield, N.J., then moved to the Vineyard in 1978. While Sandy lived on the Vineyard, she helped run the family construction business, Gramco. Sandy was active on the hospital’s finance and quality assurance committees. One of their fundraisers was a game booth at the fair. The stroller-shaped roulette wheel raised money for the ob-gyn relief fund which eventually produced enough to get a full time ob-gyn doctor on the Island. She enjoyed painting, fishing the Derby with Steve, and traveling, specially family trips to Walt Disney World with her grandchildren. She also enjoyed gardening, and grew the prettiest roses. When they moved to Florida, it took her forever to decide on what palms tree to buy: Who knew there were so many types of palm trees?

Sandy was predeceased by her brother, Theodore Hehl. She is survived by her husband Steven, her younger sister Deborah, her daughters Kimberly C. Carlos, wife of Adirley Carlos of Edgartown, and Theresia L. Gramkowski of Cape Coral, Fla. Sandy is also survived by her grandchildren, Brendan M. Gramkowski of Cape Florida, Sabrina E. Carlos, Gabriella C. Carlos, and Franchesca R. Carlos of Edgartown. The family loves and misses her.

Arrangement are by Fuller Metz of Cape Coral, Fla., and will be private. Donations can be made in Mom’s memory to Hospice.