The Tisbury School project cleared a hurdle, and the project is headed for the Massachusetts School Building Authority (MSBA). Three boards — the school building committee, the school committee, and selectmen — met jointly Thursday and approved the step, with only one of the 20 voting officials opposed.

The project’s architect and owner’s project manager pared down the budget by $1.5 million. The total project estimated cost is $41.2 million, and the town’s portion of $31.6 million would require votes at town meeting and in a townwide election to raise taxes under Proposition 2½. The state would reimburse $14.2 million, according to the budget numbers.

“It’s tight and carefully estimated,” Richard Marks, president of Daedalus Projects, the owner’s project manager, said. About 5,000 square feet have been cut from the building’s size to help reduce the overall price, he said. “It’s aggressive, but it’s achievable.”

That was not enough for selectman Tristan Israel, who has asked several times to have the project pared down to as close to $30 million as possible. Mr. Israel talked about the town’s competing projects, and a community that has a lot of elderly on fixed incomes.

“It’s too much money for people living in this town,” he said before the vote, predicting that he would be the lone voice in opposition. “I’m still going to advocate for getting this price down.”

To cut costs, Peter Turkowski, the project’s architect, told the committees that he redesigned the building with a flat roof over the gym, changed some materials, including the roof materials, and eliminated some items, like playground equipment, that could be paid for through either fundraising or Community Preservation funds.

Several people balked at the flat roof, particularly on the side of the building that faces West William Street.

The school’s cost could rise an additional $1.9 million if the town goes for a construction manager at risk, which allows the contractor to be interviewed and selected. The other option is to seek competitive bids, but that requires the town to take the lowest bidder, something some building committee members have said is more risky for the Island project.

The town would be “shooting itself in the foot” not to add a construction manager at risk into the budget, building committee member Reade Milne said.

Both Mr. Marks and Mr. Turkowski made it clear the budget numbers are not set in stone, and the design plans can still be altered. But the town needs to submit a reasonably close budget, which can be tweaked throughout the month of January, before a final vote by the MSBA scheduled for Feb. 14.

The building will replace the existing Tisbury School, which houses students in grades K-8. Once the new building is ready, the old school will be bulldozed, which is all part of the overall costs.

Mr. Marks made a final push for support, saying the project is not a “dream job,” but a practical school building that meets the town’s educational needs. “I’m not saying that we can’t do more [to cut costs],” he said. “I just want to stress, for the record, that we have worked hard to make it as efficient as possible.” 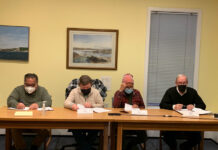