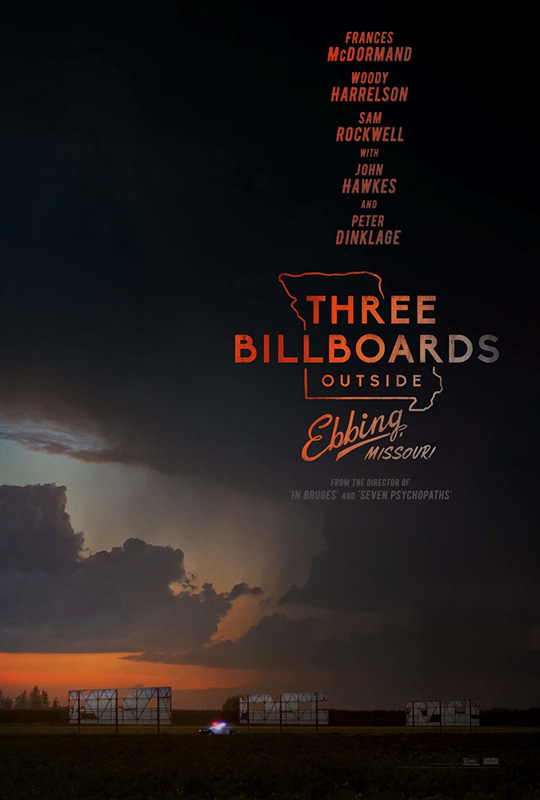 “Three Billboards Outside Ebbing, Missouri” arrives at the Martha’s Vineyard Film Center this pre-Christmas weekend. Starring Frances McDormand, it has already earned six Golden Globe nominations, and Oscar nominations are sure to follow. McDormand’s role in this film is reminiscent of her Oscar-winning one in “Fargo” (1996).

“Three Billboards” opens with shots of the very billboards of the title, but they’re not yet in the vivid red with black lettering that will call into question the adequacy of the local sheriff’s investigation of the death of Mildred Haye’s daughter Angela, who was raped and murdered months ago. McDormand brilliantly inhabits the role of Hayes without theatrics or gloom. As Mildred, she has simply decided it’s time to push things along.

Played by a no-means-underrated Woody Harrelson, Chief Willoughby is a patient, even gentle man who has uncovered virtually no evidence about the heinous crime. Mildred tries his forbearance, even as he confesses to her that his cancer-ridden days are numbered. His second-in-command, Officer Dixon (Sam Rockwell), injects comic moments of incompetence that keep “Three Billboards” from turning too depressing.

At the same time that Mildred seeks justice for her daughter through the kooky use of billboards, which has its elements of humor, she remains a deeply grieving mother. McDormand makes her pain powerfully obvious, but not overwhelming, for the viewer.

It doesn’t help that her still abusive ex-husband Charlie, played by John Hawkes, has taken up with a teenage ditz. Her own teenage son Robbie is skillfully played by Lucas Hedges, whose impressive breakout role was Patrick in “Manchester by the Sea.” Robbie is understanding and protective of his mother, even though her antics embarrass him in front of his schoolmates.

In many ways, “Three Billboards” operates as a character study, first of all of Mildred, a woman as determined as she is aggrieved, but also of Sheriff Willoughby, who tries his best to do the right thing despite the goofy antics of Officer Dixon. Nor is Robbie a cardboard kid. Even Dixon’s mother (Sandy Martin) has substance as a character.

Director Martin McDonagh adds texture to “Three Billboards” through shots that convey the charm of rural Missouri. Allusion to issues like the underlying racism of the police department, Dixon in particular, also flesh out small-town Ebbing.

Mildred works in a gift shop where an ominous red herring of a customer brings tension to a plot that doesn’t contain a lot of action. Despite its slow-moving pace, “Three Billboards” will reward viewers as an unusual and satisfying cinematic experience.

Information and tickets for this and other Film Center or Capawock Theater films are available at mvfilmsociety.com.