Year-round living on-Island takes a tolerance for two extremes — summer’s insanity, and winter’s simplicity. The ebb and flow works well for some, but can be underwhelming for others. There’s one demographic that feels this most — the 20somethings.

“Wouldn’t it be great if there were more things for young people to do?” Island resident Alexandra Bullen Coutts said. Although she recently exited the demographic, it wasn’t long ago that Coutts felt this way. She grew up spending summers on-Island, and moved here year-round after grad school in NYC.

“I was smitten by the quiet, simple lifestyle,” she said. “Especially after living in the city for four years.” Coutts farmed and gardened at Morning Glory Farm, and also picked up writing projects on the side.

“I loved it,” she said. “But eventually it started to feel like maybe it was a little too quiet.”

As it turns out, there are a lot of young people on-Island who feel this way, and Coutts wants to help. This past fall, she started Oyster MV, a social networking group for the Island’s young adults. The name came from the phrase “The world is your oyster,” Coutts said.

As she started the project, she realized there’s actually a lot happening, even in winter. “So instead of creating the events, Oyster MV is becoming more of a mouthpiece,” she said.

Coutts approached Island organizations she felt had something to offer this demographic, and they were quick to collaborate.

The Trustees of Reservations, Not Your Sugar Mamas, Martha’s Vineyard Community Services, the Yard, and the Film Center are among the Island groups that were more than willing to jump on board.

Last month, Oyster MV and The Trustees teamed up for a hike through Menemsha Hills. Shortly after, Oyster MV hosted an event with Ky Keenan at Not Your Sugar Mamas with tarot card readings and a talk on organic eating. A monthly Tuesday film series began last week at the Martha’s Vineyard Film Center. The series theme is classic throwbacks, and kicked off with “The Royal Tenenbaums.” “Caddyshack” will screen on March 6, “Clueless” on April 3, and “Point Break” on May 1.

Coutts said it’s been a gradual start, but she’s impressed with the connections people are already making. Attendees reflected on how hard they’ve looked for different things to do in the off-season.

“One woman told me she really wanted to see an owl, and was the only person under 60 at an owl-sighting event. Another mentioned going on a nature walk, and being the only person over 5,” Coutts said.

“We have this robust population of people in their 20s that need to be more connected,” Coutts said. “People are really satisfied — they have their groups. But wouldn’t it be nice to get to know those people you’ve seen around, but haven’t had the opportunity to talk to?”

Follow Oyster MV on Instagram, and if you’re 20something and looking for something new to do, find the little oyster logo. 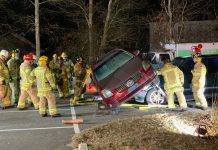 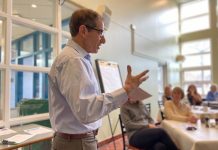