Honey has been used as a food and medicine for thousands of years. Bees make honey by collecting nectar from flowers and mixing it with enzymes to make it last longer in storage. The bees then regurgitate the watery nectar into cells in the hive, and fan it with their wings to evaporate extra liquid. Honey’s flavor and color changes depending on the region where it’s harvested, and what types of flowers the bees visit. Most microorganisms don’t grow in honey, which means it won’t expire and can be stored and used indefinitely. Honey was once found in a 3,000-year-old tomb in an Egyptian pyramid, and it was still edible!

Raw honey is high in antioxidants, which help boost the immune system, and can be used as a sleep aid or to heal wounds and burns. Next time you have a cold, eat a tablespoon of honey to ease a cough. Try using honey in salad dressing recipes, or drizzling it on fruit or toast with butter. Honey can also be used to replace sugar in most baking recipes, just use ½ to ⅔ of a cup of honey for every cup of sugar the recipe calls for. It’s worth noting that honey is still high in sugar and calories, but it contains vitamins and minerals, which white sugar doesn’t.

Honey contains more nutrients when it’s unpasteurized, so look for raw honey when shopping, and try to buy as local as possible. You can find Island honey at Cronig’s, Edgartown Stop & Shop, and Ghost Island Farm.

Place all ingredients except honey in a small pot over medium heat. Whisk together and bring to a boil, then let simmer on low for 3 to 5 minutes. Remove from heat, and stir in honey. Strain into cups and enjoy! It is delicious cold as well; just let cool and store in the fridge. 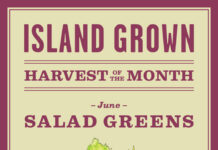 Harvest of the Month: Salad greens 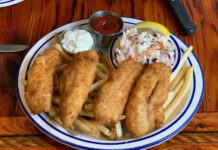