Larry Levine, 84, retired owner of the Vineyard Dry Goods and Village Fair, died peacefully at his home on Wednesday, Feb. 7, 2018, in Henderson, Nev. 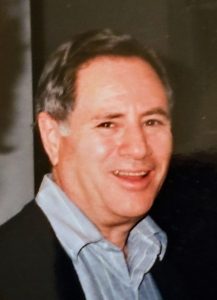 A devoted husband, father, grandfather, and son, Larry was born on the Vineyard on August 18, 1933, and grew up in Vineyard Haven. His parents, David and Ida Levine (née Brickman), were founders of Vineyard Dry Goods in Vineyard Haven, and were lifelong Islanders. Larry studied business at Boston University, and served in the Korean War with the U.S. Army. He moved back to the Island in 1965 and opened the Village Fair, then the Home Fair in Edgartown. He ran these stores for 22 years, and helped his mother run the Vineyard Dry Goods store for another nine years.

Larry was an avid bridge player, and began the Vineyard’s first duplicate bridge game; he also loved to play tennis. He moved to Las Vegas, Nev., where he lived with his wife Helen for 20 years.

Funeral and burial services were held at King David Memorial Chapel and Palm Valley View Cemetery in Henderson. In lieu of flowers, the family requests that memorial donations be made to the Martha’s Vineyard Cancer Support Group, ​P.O. Box 2214, Vineyard Haven, MA 02568, ​mvcancersupport.org​.

A memorial service will be held at the Martha’s Vineyard Hebrew Center, with the date to be announced.