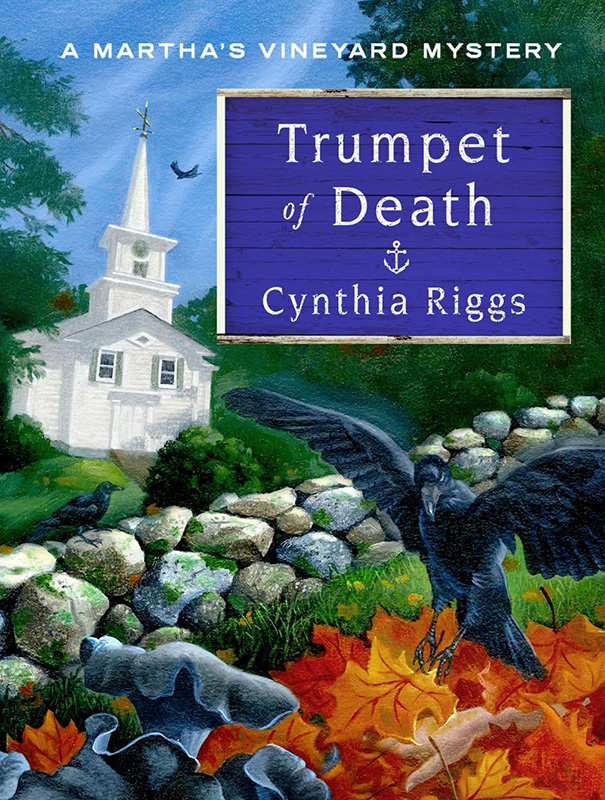 Island author Cynthia Riggs has developed an improbable recipe for the success of her 13 Martha’s Vineyard Mysteries. Here’s the deal: Begin with a 92-year-old sleuth sniffing out murders on an Island where murders are more rare than a 60-pound striper. Add the insights of the author on real-life Island personalities, attitudes, and culture. Stir in a liberal dollop of knowledge of Island flora and fauna, and simmer. Update frequently with changing social mores and issues, and by God, you have a winner.

“Trumpet of Death,” her latest, includes all those ingredients. Having read the majority of her thrillers, I find I anticipate the details of nature and environment liberally sprinkled through the pages as 92-year-old sleuth Victoria Trumbull makes sense of the mayhem.

We learn, as Ms. Trumbull navigates through two bodies, a full crew of suspects, and a brilliant Island fall season, how to make terrific baked beans, and the properties of the rare but succulent Trumpet of Death mushroom occasionally found here.

In all, it’s a generous read, particularly for folks familiar with the winding roads and manners of Island life, because you can put yourself in the scene, including the scene of the crime.

In “Trumpet of Death,” we are treated to lots of washashores and seasonal residents we love to hate, headlined by Samantha Eberhardt, the quintessential spoiled rich kid. Well, the daughter of a rich guy afflicted with too much money and a dearth of humanity. Bruno Eberhardt, her dad, is one of those people we just shake our heads at.

Samantha, on the other hand, is a tornado of trouble who rages through the lives of Island guys who ought to know better and Island teens without the life experience to know better. As rapper Mr. Shadow tells us, it’s all about sex, drugs, and money for lovely and lissome Samantha.

Turns out she’s turned on a bunch of high schoolers to all three, as Samantha develops a drug ring on the Island. When we join Victoria, she is perusing a social landscape littered with Samantha’s jilted lovers, a missing teen, and several others in rehab, along with multiple sets of parents who are angry enough to kill.

Add in Sammy’s doofus boyfriend Zack, who’s smart enough to know he’s in over his head but too dumb to figure out how to escape, and you get a perfect patsy after someone dispatches Samantha to her final reward with a blunt object and dumps her body, covered with leaves, just off the bike path on the Edgartown Road near the old West Tisbury firehouse and the Little League field.

The cops nab Zack for it. The poor sod thinks he’s being booked for attempting to poison a bunch of people with Trumpets of Death. Now, Victoria has shown him the morsels on a nature walk and told him they were delicacies, but all he heard was “death.” Yeesh.

Daddy Bruno is, of course, berserk, and has Zack in the crosshairs. Zack’s only relief comes from the quality of the fare at the Duke’s County House of Corrections.
Ms. Riggs believes Zack’s in the clear, and begins interviewing kids, parents, friends, and lovers of Samantha in a grim, detailed rollout of the silent onslaught of drug addiction and the resulting family and social carnage. She learns not only that a celebration of Samantha’s life is unlikely to be held by the victims, but also that the list of suspects is growing exponentially.

Add in shenanigans involving Bruno, his spurned Wampanoag lover, and her two larcenous brothers, and the plot thickens. When Bruno gets whacked on the head and lies dormant in ICU, we’ve got a real stew.

But Victoria perseveres. Now most old people are not mobile. We’re pretty slow actually, but we are steady, and Victoria works the roomful of suspects until the killer self-reveals.

Ms. Riggs, now well into her 80s herself, has a good ear for the current social dynamic, and keeps her stories relevant, including words, phrases, and scatology that made this reader chuckle.

“Trumpet of Death,” a novel by Cynthia Riggs from Minotaur Books. Hardcover, 295 pages. $25.99. Available at Bunch of Grapes bookstore, Main Street, Vineyard Haven, and online. No. 14, “Widow’s Wreath,” published by Crooked Lane, is planned for release in June 2018.