Schumer, who came to the showing with her newlywed husband Chris Fischer and dog Tati, introduced the film that stars her friend, Bridget Everett. “Shout-out to Chris,” Schumer said, pointing to him in the audience, “you’re mad cool … thanks for showing me the Vineyard.”

The crowd then got a sneak preview of Schumer’s upcoming comedy, “I Feel Pretty,” that is slated to premiere in April.

They also talked about how much they both love the Vineyard, referencing the Chilmark General Store, the Black Dog, and “never having to wear eyeliner or bra[s].” They also did a Q and A with the audience.

To keep up to date with the latest MVFF information, visit tmvff.org. 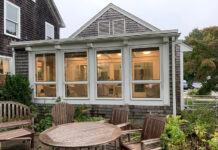