Carroll Buress died peacefully, with his wife of 30 years, Deborah Buress, and family around him at their home in Vineyard Haven on the evening of Saturday, March 17, 2018. He enjoyed celebrating his 90th birthday just a few months prior. 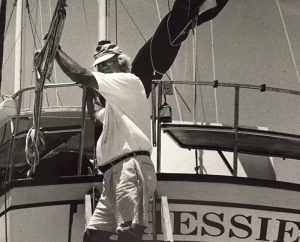 Carroll was born in Baltimore on Dec. 22, 1927, the only child of Roy and Katherine Buress. He studied engineering at Johns Hopkins University before joining the Army and becoming a sergeant first class medical inspector at Walter Reed National Military Medical Center in Washington, D.C. His white-glove treatment was infamous, a fact he reminded his children of, much to their dismay, during each morning’s bedroom inspection. After his honorable discharge in 1953, he found his stride selling electrical equipment, and eventually took over the whole company, renaming it Downey, Turner & Buress.

But everyone who knew and loved Carroll understood that sailing was his great passion. As a young man, he competed in and won countless races in the Chesapeake Bay, Bermuda, and beyond. He started racing with Lightnings, then moved on to a 26-foot Ranger, then his 33-foot Allegra, 42-foot Vitesse, 52-foot Liberté, and finally 54-foot Chessie. Naturally, he met his third wife Deborah at Singles on Sailboats. Many of his friends and family remember the joy of drinking a rum and Coke, or a can of Tab, and eating potato chips on one his beloved sailboats and watching Carroll work his magic. (His children mostly remember having to clean and varnish the boats nonstop.)

He and Deborah married on Feb. 12, 1988; he retired in 1990, and they moved from Annapolis, Md., to Martha’s Vineyard in 1995. In retirement he sailed up and down the East Coast, all the way to the Keys, the Caribbean, Mexico, and Belize. Later in life, when sailing became more difficult, Carroll turned to racing Soling remote-control boats in Vineyard Haven Harbor every Sunday. It wasn’t long before he was spending more time in his workshop meticulously building the boats for himself and his Martha’s Vineyard Model Yacht Club buddies than he did sailing them. Indeed, his family and friends cherished (and took full advantage of) his natural ability to build and fix pretty much anything.

He is dearly missed and survived by his wife, Deborah Buress, and their dog Bob; his children and their spouses Mary Katherine and Mark Kohler, Lee and Armelle Buress, and Bill and Kathy Buress; his stepdaughters Cameron, Kylie, and Makenzie, and their spouses Brandon, Carlos, and Christopher; his grandchildren Alex, Elizabeth, Nicole, Katelyn, Jeff, Tristan, Nicholas, Charlie, Daniel, March, Brookes, and Hartwin; and his great-grandchildren Bridget, Jack, and Thomas.

In lieu of flowers, please consider donating to the Island Housing Trust, ihtmv.org.