Here on the Vineyard, this March has been a month for nor’easters, three in in the space of about 12 days, and as we prepare to go to press, still another is on the horizon. We asked Linsey Lee if she had any oral histories of nor’easters over the years to give us some perspective, and she had several, which all focused on the “the gale of 1898,” as it was known.

But what was the same was the selfless and tireless work put in by the sailors on the waterfront in an effort to limit damage in the face of gale-force winds and bone-chilling cold.

Gratia Harrington of Tisbury would have been about 13 at the time. She was the daughter of George W. Eldridge, creator of the “Eldridge Tide and Pilot Book.”

Below is the conversation she had with Linsey in 1983.

‘We loved to go out in storms’

You see, we loved to go out in storms, my sisters and myself. And it was a Sunday morning, the last of November. It wasn’t cold, but there was this terrific wind and the snow.

And so we told Mother we should go out and see if there was Sunday school. Of course I knew there wouldn’t be any, but we wanted to get out.

Mother came from the Middle West, and she never could understand why we liked to go out in storms. All I could think of was a hen who had hatched a bunch of ducklings.

But there was a funny thing. There was a two-masted schooner right up on the beach. And the name of it was the Mary Eldridge. And of course, that was my sister’s name. Isn’t that a queer thing!

All those wrecked ships with just their topmasts sticking out of the water. And of course, the Newburg had come around and gone through the wharf. And her bowsprit was sticking out the other side.

And so we went home after we had seen all we wanted to see.

Mr. Edwards at the Seamen’s Bethel had a daughter about my age, a friend of mine. Mrs. Edwards said to me, “Can Mary” — her name was Mary, too — “come up and spend the night with you? She’s so troubled about this storm, and she’s so nervous and upset.”

The Vineyard Haven men got an old whaling dory and patched it up. And they went off and rescued a lot of men. All the dory could carry. And the men came into the Bethel, and they were taken care of and given a place to sleep and eat and so forth.

Mary had seen them come in, and she was in such an awful state that she came up and spent the night. I remember sleeping with her and she having trouble going to sleep and so forth.

And so all these men were there at the Bethel.

They sent them home as soon as they could. But there were 75 men that were there for some time. Of course, the village helped feed them. But I suppose they slept on the floor. I don’t know how they managed.

Mr. Edwards used to come up and say to Mother, “Well, we’ve done all we can, can’t you help us out? Can’t you get up a little entertainment? We’re going to have ice cream and cake. Have a sociable.” And so my mother said, “All right.”

Two of my sisters played the violin, and one sister sang, more or less indifferently. And she had friends; they had a little quartet that used to sing.

And I spoke pieces, and we handed around the ice cream and cake.

So we went down to the Bethel when they had all those shipwrecked sailors.

I remember very well. The terrible experience. Looking into the faces of all those men and thinking what they had been through.

Excerpted from “Vineyard Voices,” by Linsey Lee, curator of oral history at the Martha’s Vineyard Museum. More oral histories are available at mvmuseum.org. 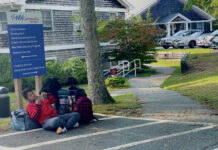