Once you’ve met artist, photographer, Vietnam veteran, and all-around interesting Islander Dick Iacovello, you won’t forget him. His long gray-white hair pulled back in a ponytail, the hazel eyes, and the silver jewelry he wears on his worn hands hint at an intriguing life. If you sit down for a conversation, you’ll realize intriguing is just the tip of the iceberg.

During our first conversation at Mocha Mott’s a year ago (he’s a frequent customer), I learned Iacovello’s photos from his time as a medic in the Vietnam War are in a permanent exhibit at the Library of Congress. I also learned that he once hung out at Ram Dass’ parents’ house in Cambridge back in the day, not long before the yogi and spiritual teacher’s book “Be Here Now” was published. But it was his photographs of Van Morrison at Boston Common in 1968 that really caught my eye. For years I played old Van Morrison CDs in my car so often that my kids routinely hid them from me.

I love the melted rainbow look of Iacovello’s print of Van Morrison playing at the “First Great Smoke-In,” held in 1968 at Boston Common. Apparently, I’m not the only one who loves it. I found out a few weeks ago that Iacovello’s photos are included in a new book about Morrison by Ryan Walsh that’s getting a lot of positive buzz in magazines like Rolling Stone and the New Yorker, “Astral Weeks: A Secret History of 1968.” We sat down once again at Mott’s to talk about Iacovello’s most recent claim to fame.

He told me he gave Walsh permission to use three of his Van Morrison photos in the book. Iacovello was living in Boston in 1968 when the singer was staying in the area, and a group of Iacovello’s friends, members of a Provincetown band called the Barbarians, had a brownstone with a recording studio on the first floor.

They reconfigured the apartments into lofts, Iacovello remembered. “Needless to say, there were like 60 hippies coming in and out of there. We were getting high all the time, and we could hear Van Morrison in the studio. We used to go nuts because he’d be singing ‘Gloria’ all the time. He’d play the same song a hundred times. It ended up that I had these photos that I took on Boston Common.”

Walsh saw the photos on Facebook, contacted Iacovello, and the rest is recent history.

“Not only did Dick capture a future icon in a moment where very few people cared about him, but the photos also provided vital clues to aid me in my search to figure out who Van Morrison’s Boston musicians were,” Walsh wrote in an email. “The guitarist seen in the photos with Van turned out to be Rick Philp, a talented Emerson College student who also worked with Carole King; Philp’s story is tragic and is an essential part of the book.”

Walsh’s book unveils the backstory of Morrison’s legendary album “Astral Weeks.” Hailing from Belfast, Northern Ireland, Morrison spent most of 1968 living in Cambridge and Boston, laying low after an unsavory run-in over his recording contract at a time when his immigration status was not exactly in order. Walsh digs deeper, though, and highlights Boston’s role in the era of LSD trips and commune life. His book is filled with a cast of characters with names both recognizable and obscure.

Walsh, a Boston musician and journalist, said the process of writing the book took 2½ years. He interviewed more than 100 people, and immersed himself in newspaper archives. “Because I was not alive in 1968, it was important to me that I get this right by talking to as many people who were there as possible,” he wrote in his email. Walsh said he wrote the book because of his deep connection to the album. “It all stems from my love of the album, ‘Astral W

eeks,’” Walsh wrote. “From there, the path gets pretty crooked, but none of it would have happened if the LP wasn’t a consolation to me during a very lonely time in my life.” 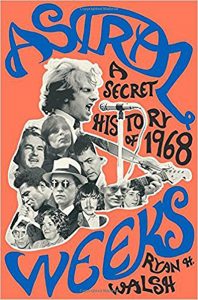 Iacovello said he’s taking his time reading Walsh’s book. He said there’s a lot to take in. He’ll be 80 in July, but Iacovello remembers Boston in the late 1960s during the days of Mel Lyman’s Fort Hill Community, and Avatar, the underground newspaper associated with Lyman.

“I read it and then I flashback, because I lived the whole thing,” Iacovello said of the book. “Mel Lyman … he had a place up on Mission Hill, and they were like acid gurus. He was like Charlie Manson without the killing.”

It’s more than that for Walsh.

For Iacovello, getting his photos published in a book is one more unexpected piece of good news. “I’ve been doing this for so long, and I’ve gotten more notice the past four years than my entire life,” he said. “You don’t expect anything to happen overnight, that’s just not the way it works. If you expect something to happen overnight, you’ll end up dying young of frustration. Every day you’re doing your work, creating what comes out of you, and hoping one day you’ll get your money shot … and if it doesn’t happen, you at least have a body of your work.”

Still keeping the light on