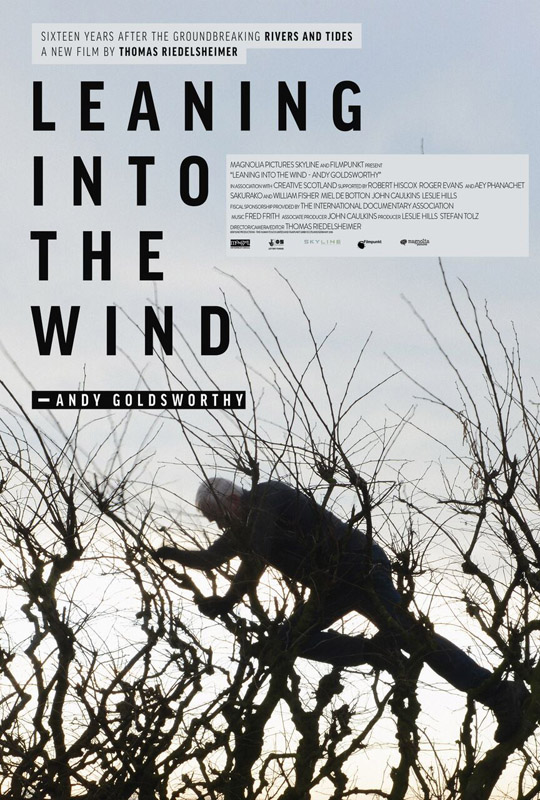 Coming to the Martha’s Vineyard Film Center this weekend is “Leaning into the Wind,” a new documentary by German director Thomas Riedelsheimer about the English artist Andy Goldsworthy.

It is the second documentary about the acclaimed 61-year-old artist, after “Rivers and Tides: Andy Goldsworthy Working with Time.” The Film Society showed it 12 years ago. Both are must-sees for viewers interested in the interaction of art and nature. “Leaning into the Wind” unfolds slowly, a necessary approach to capturing the essence of Goldsworthy’s work.

If ever the medium of film can be used to present and illustrate artistic expression, “Leaning into the Wind” is the case. This artist interacts with nature in fascinating ways, and an important element of his work is to reveal the evanescence of the environment, which changes with time and the elements.

In “Leaning into the Wind,” the artist’s international travels feed his inspiration. The film begins with Goldsworthy in the Itibitoca Reserve of Brazil. The floor of a house there, made of clay and animal feces, interests him. He uses a tree service to cut crosshatches into the trunk of a tree. In another case, he inserts a tree trunk into a house and covers it with clay. He visits his home base in Dumfriesshire, Scotland, where elm trees lying across a small river have often been the subject for his art. As an illustration of the performance art that is one component, he climbs up and over the fallen trunks, which have suffered from Dutch elm disease. He suggests they still carry the violence of the fall. Such interactions help him make sense of the world. In this case, he sprays the trees’ cracks to see inside them. Another approach is to cover rocks in and around the river with yellow elm leaves as, he says, an expression of life. Frost turns the elm’s leaves black, and rain sends them flying — evidence of how changes in the environment affect it.

“We all have to deal with loss,” Goldsworthy says, “and this is what I do to make sense of my life.” He shares such personal events as his separation from his wife Judith, his divorce, and her death. At one point he blows a mouthful of leaves out of his mouth, and suggests the beauty of art is how it makes you step aside.

Urban environments newly interest him in part because of their “river of people.” He lies down on a sidewalk in the rain, leaving behind his dry silhouette on its surface. He fills a St. Louis museum’s courtyard with 25 10-foot stone arches. Goldsworthy’s work highlights its surroundings and draws the eye to them. One recurrent theme he executes is carving egg-shaped cavities into stone to create the idea of a person sleeping in stone. The final scene is both absorbing and terrifying.

By letting his camera focus on what Goldsworthy is up to, the director provides a broad range of his work that a viewer would not easily be able to experience. Music by composer Fred Frith handsomely accompanies the images of a film that provides filmgoers with a remarkable view of an exceptional artist and his art.

For information and tickets to this and other Film Center screenings, go to mvfilmsociety.com.