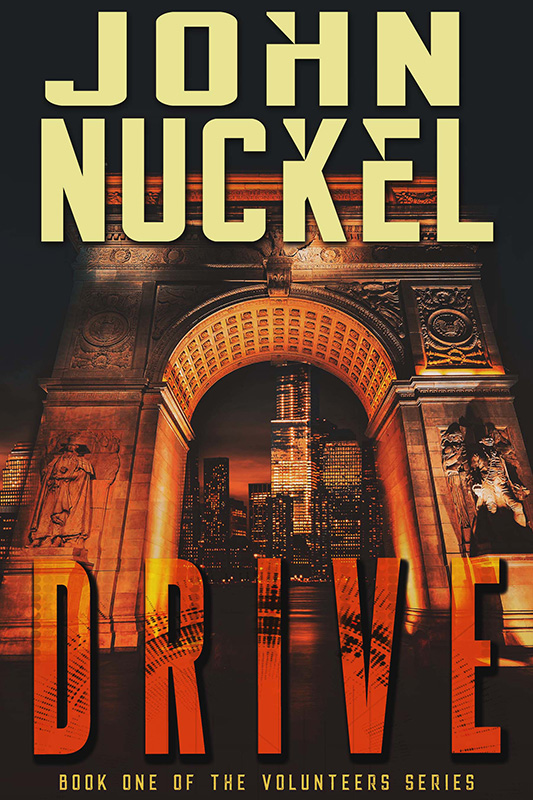 John Nuckel looks like a cop, with a name that could fit characters in the spate of crime thrillers he has produced over the past eight years.

Nuckel is not a cop, he’s a Wall Street guy who apparently did well, then came to his Literary Jesus 10 years ago, and has been writing to beat the band since. “Drive” is his fourth novel. His first three novels dealt with financial crimes. “Drive” deals with deadly high-stakes international cyber hijinks, a scenario with intimations and possibilities that fit the current political environment here and around the world.

“Drive” is a well-done page-turner that’ll keep your interest to the final page. The thriller part is some of the book’s carry for the reader, but Nukel gives us more. He has woven a tale of historical fiction dating to the late 1880s in New York City, when criminal politicians at Tammany Hall ran and robbed the city.

A fictional and very secret group of Volunteers, the nickname for Teddy Roosevelt’s Rough Riders, who won fame in Cuba during a brief U.S.-Spanish war, have been formed by vets of that skirmish, backed by the money and influence of New York’s Rockefellers and Morgans, who were real New York dynastic families. The Vols’ motto was “Et Omnia Recta,” loosely translated today as “Do the Right Thing.”

Bringing Tammany Hall down was their “right thing” then, and they used politics, press, money, guns, and extralegal means to bring it down. Nuckel has done the historical digging, and offers seamless interactions between real people with his fictional characters, using flashbacks and present-day settings to track the Volunteers’ work. Fast-forward 130 years, and the Volunteers are still at it in our cybernetic world, in which two men, Sheng, a Chinese national, and Pap Martinez, an American, are the undisputed champs of electronic mastery and mischief.

Both have made billions, Martinez through development of electronic gizmos in the private sector and as our government’s go-to guy for electronic espionage and counterespionage. Sheng made his pile through work with the Chinese government and hacking a billion here and a billion there of other people’s money.

He’s been obsessed with killing Pap for years, on the theory that there can’t be two No. 1s, and he was not put off by Pap’s fake death on a New York sidewalk, after which Pap reinvented himself as Hank Suarez, living deep off the grid on Martha’s Vineyard. Sheng figures it out and comes to the Vineyard to snatch Suarez to appease his own government, who realize Sheng’s gone nutty and rogue. The Chinese want to kill him.

The Vols want the same outcome for Sheng, and dangle Suarez as bait, giving him a body person in Annie Falcone, an NYPD cop backed up by a sniper team. The plot involves a corrupt Edgartown cop, a wicked smaht Edgartown police chief, and a little-known Island byway off the Right Fork in Katama.

Interesting to note that this well-done thriller had its origins when Nuckel was jogging in the area several years ago, and found the path he calls “Huckleberry Commons” was not on GPS, thereby a good hiding spot. Nuckel’s find led to the creation of “Drive.” Very cool.

Nuckel has a talent for creating multidimensional characters and a zest for class bias (he’s for the underdog) that was absolutely heartwarming for this reader. Nuckel came out of New York welfare projects, and made it on his own. It appears that he subscribes to Scott Fitzgerald’s thought that the rich are different from you and me.

Nuckel has put in the shoe leather on this one. He knows who 1890s New York gangster Monk Eastman, was and gives Monk a part in this book, as have writers from Jorge Luis Borges to Mark Helprin. He can describe the smell of a closed-up room in which techies have hunkered for a week with laptops, Pepsi, and Cheetos.

In short, this is not your formulaic thriller. The best of the genre may be written a hair more smoothly, but Nuckel injects his understanding of the human condition and of our nature that is authentic and his own.

“Drive,” a novel by John Nuckel, in paperback from thewordverve.com. 227 pages. Available online in hard copy and ebook formats.