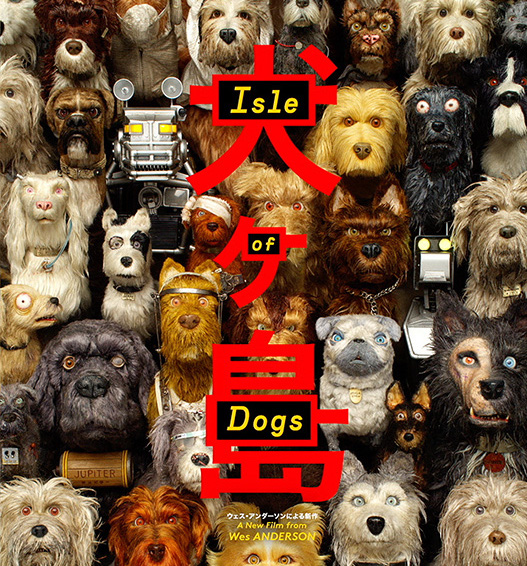 His latest film, which has already won him a best director award at the Berlin International Film Festival, is set in the future in the Japanese town of Megasaki. The villainous Mayor Kobayashi (voiced by Kunichi Nomura) claims the city is overrun by dogs infected with several diseases. Earning public support with his disinformation campaign, the mayor sends the city’s dogs off to Trash Island, a garbage dump where they are forced to forage for foul scraps.

The top five alpha dogs, Rex (Ed Norton), Boss (Bill Murray), Duke (Jeff Goldblum), King (Bob Balaban), and Chief (Bryan Cranston), take charge. All the characters are voiced, and part of the fun is recognizing whose voice is which. There are many additional well-known actors voicing characters. Before long, Atari (Koyu Rankin), the 12-year-old ward of the mayor, crash-lands his little plane on the island, where he searches for his dog Spots (Liev Schreiber). The alpha dogs pitch in to help, and together they comb the island in search of Spots, with many misadventures. Chief, a mongrel, remains aloof and has a habit of biting.

Back in Megasaki, Tracy Walker (Greta Gerwig), an American foreign exchange student, leads a group of pro-dog activists who campaign to end the embargo on dogs. Meanwhile the mayor detains a scientist who has developed a serum that will cure the dogs of their illnesses and secretly has him killed. Yoko Ono voices his distraught assistant, Yoko Ono. It’s hard not to see Tracy as a white American taking over for the Japanese; also little questionable.

Perhaps intending to foreground the dogs, who speak English, Anderson has most of the Japanese speak in their own language, which can be off-putting without subtitles. Some translations by Interpreter Nelson (Frances McDormand) do take place. A jokey non-voice Anderson inserts is a credit for Anjelica Huston as a mute poodle.

Both the music and distinctive animation are high-quality, adding to the richness of “Isle of Dogs.” Anderson gives his dogs charmingly authentic qualities: sniffs, sneezes, barks, occasional howls, a few dogfights with appropriate wounds, and an occasional flea. He alludes to a number of his favorite Japanese directors like Seijun Suzuki, and actors like Toshiro Mifune, and underlying references to American politics are hard to miss. “Isle of Dogs” is a delightful film that will be enjoyed by both children and adults.

For information and tickets to this and other Film Center screenings, go to mvfilmsociety.com.