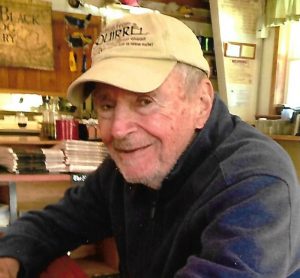 Born in Manhattan in 1926, Roger enjoyed a lifetime relationship with the Vineyard. His first trip to the Island, as a very young child, was aboard an overnight steamer from New York with his parents, Max and Clara. After his parents built a summer home on New York Avenue, Roger spent every summer there until 1943. Roger then attended MIT, where he received his Ph.D. in chemical engineering and was part of the Navy V-12 program.

Roger met his wife, Elaine, at MIT, and brought her to the Vineyard in 1945 to meet his parents. Roger and Elaine later honeymooned in June 1949 in a cottage by the hospital. Max and Clara bought a different cottage, and when the hospital expanded, they moved the cottage to its current location on Lagoon Pond Road.

Roger had a successful career with positions at Exxon, International Minerals and Chemicals, Westvaco, and Guilford Technologies, which culminated with 22 years at Union Camp. While at Union Camp (now International Paper), Roger rose to be well recognized in the industry and to the position of corporate technical director. Although his work moved him and his family to New Jersey, Florida, Connecticut, and Georgia, summer vacations in the Vineyard were paramount to Roger.

Roger’s passions at the Vineyard included sailing, fishing, clamming, and gardening. Of these, sailing was his greatest joy. Roger and Elaine had a 35-foot motor sailboat for 15 years, and spent nine years cruising between the Vineyard and Beaufort, S.C., with winter trips to Florida. They were known along the Intracoastal Waterway for being friendly and playing bridge.

Roger and Elaine finally gave up sailing for shore activities, and settled year-round into their home on Weaver Lane in 1996. Over the years they enjoyed hosting family and friends in the cottage and shared with them the pleasures of the Vineyard.