Barbara Ball Rivers of Sarasota, Fla., died peacefully in her sleep on April 10, 2018, after a recent decline in health. She was 90 years old. 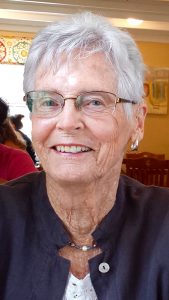 Barbara married Thomas Ellis Rivers Jr. in April 1949 at the age of 21, after a long courtship beginning at the ages of 14 and 16, respectively. She worked in New York City as an executive secretary, earning more than her husband for the first couple of years of their marriage. The couple started their family in New Canaan, Conn. After a brief move to East Greenwich, R.I., they established roots in Wayland, where they and their two children lived happily for many years.

Barbara enjoyed summers on Martha’s Vineyard with her parents starting in early childhood. Her parents eventually bought a home on the island called Gaymark, named because of its proximity to the Chilmark, then Gay Head, town line. Years after the Balls’ passing, Barbara and Tom moved to Gaymark in 1980. They enjoyed living there immensely. After many years, Barbara and Tom moved to Kalyana Lane, Chilmark, to be (slightly) closer to humanity and retire from the constant demands of the larger, hard-to-care-for estate. Their newly renovated home on Tea Lane brought them a gorgeous view and simpler maintenance, while they never forgot the history and many memories of their beloved Gaymark.

Barbara loved gardening, and grew awardwinning flowers, like her mother before her. She also cultivated the family’s rhubarb, used to make her husband’s favorite strawberry-rhubarb pie. Tom often remarked that her strawberry-rhubarb pies were the best he’d ever eaten. Barbara took joy in traveling with her husband. They made it around the world three times, including a sojourn to Antarctica where they saw many penguins, whereupon they decided the emperor penguin was their favorite. This couple had a deep love for nature and her many creatures, big and small.

Barbara was a beautiful woman both inside and out, with a cheerful disposition. She often erupted into laughter, which accentuated her sparkling, kind, blue eyes. She was very fond of socializing and keeping intellectually active, with her friends and members of Martha’s Vineyard’s Want to Know Club. Her insights and calm disposition made her a sage to the next generation of women. She was also an active member of the First Congregational Church of West Tisbury, where she enjoyed many friendships and social gatherings. She was a patron of numerous Martha’s Vineyard preservation causes and nonprofits, including the Martha’s Vineyard Hospital, where she also volunteered.

Shortly after the death of her husband, Barbara relocated to Sarasota, Fla., in early 2015 to live near her adoring daughter, Diane.

During her time in Sarasota, she maintained her love of reading, frequenting the local library and keeping her daughter busy with Amazon book orders. She played bridge with a new group of friends, and volunteered on committees that enhanced the quality of life for Bay Village residents until her mobility challenges scaled back her participation. At the end of her life, she moved into a smaller, 24-hour care room that she would share. Since it could be decorated with a few personal items, Barbara picked one oil painting of Nashaquitsa Pond that included her namesake fishing boat, the Barbara B. Her new roommate was a recently widowed woman who was not only a friend from Martha’s Vineyard, but the artist of the chosen painting of Nashaquitsa Pond as well! What a blessing for both the women and their children, who were able to cement their shared bonds and love for Martha’s Vineyard in this way.

Barbara is survived by her loving daughter, Diane Dow Rivers, son-in-law Norman Joseph Dempsey Jr. of Sarasota, her daughter-in-law Ricky Vider Rivers of New York City, two grandsons, two nephews, and one niece. She was preceded in death by her husband, Thomas Ellis Rivers Jr., in 2015, and her son David Ellis Rivers, who was killed in the World Trade Center attack on Sept. 11, 2001.

Donations in her memory may be made to the First Congregational Church of West Tisbury or the MSPCA.

On May 5 at 10:30 am, a service will be held at the Chapel in Bay Village, Sarasota. A memorial service on the Island will take place in late September at the First Congregational Church of West Tisbury.