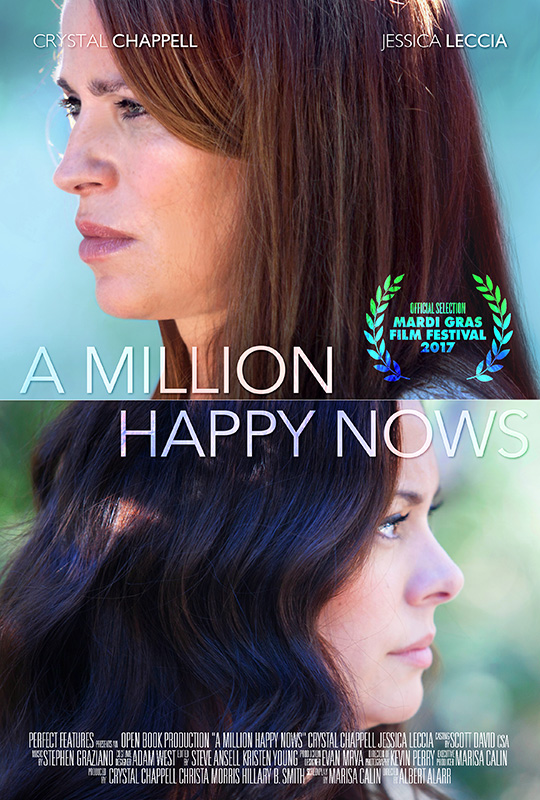 Now in its second year, the Martha’s Vineyard Film Center is hosting a four-day Spectrum Film Festival from Thursday, April 26, through Sunday, April 29. Spectrum explores the world of LGBTQ, and will bring a range of important contemporary issues to the Island. In addition to eight screenings, the festival features live music, guest directors, and fundraising for the MVRHS Gay-Straight Alliance. General admission tickets are $12, $9 for members, and free for teens and youth 13 to 21. A $1 surcharge will help establish the Tony Lombardi Memorial Scholarship, a fund that will help benefit Island youth. Lombardi was the former YMCA director of Alex’s Place, and a supporter of Spectrum in 2017. He died last December, and was a prominent mentor on-Island.

“A Million Happy Nows” opens the festival Thursday afternoon at 1 pm. The 2017 film tracks the decline into Alzheimer’s disease of retired soap actress Lainie Allen (Crystal Chappell). Her illness proves a challenge for her and her partner Eva Morales (Jessica Leggia). After the film, Emmy winner Chappell will answer questions via Skype.

The 2018 Sundance film “Believer” screens on Thursday at 4 pm. Mormon rockstar Dan Reynolds, lead singer for Imagine Dragons, commits himself to the LGBTQ cause. Although he is straight and a devout Mormon, he ends up organizing LoveLoud, a Utah concert that draws a crowd and earns support from Mormon leaders. Following the film, director Don Argott will join via Skype for discussion.

“The Lavender Scare” screens at 7:30 pm on Friday. The documentary chronicles the attack on gays and lesbians in the 1950s under President Dwight Eisenhower’s administration. A wine and dessert reception will follow the film, along with a discussion with director Josh Howard. The reception is sponsored by Tilton Rental.

“History repeats itself,” Howard said in an interview with The Times. “It’s not just history, but it has resonance today. We have to be vigilant about the progress made.”

Howard began research for the film after coming across a book, also called “The Lavender Scare.” He was shocked by the subject matter, and inspired to create the film, which took him eight years to complete. “The Lavender Scare” won best documentary in 12 different film festivals.

“Love, Simon” screens on Friday, April 27 at 4 pm. The 2018 production tells the story of closeted 17-year-old Simon Spier (Nick Robinson), who eventually is outed by a classmate. Critics cite the film as the first Hollywood production to portray a gay teenager, but it depends on cheerful, tired clichés about teenage life. After the screening, State Sen. Julian Cyr will discuss political activism and youth.

“Becks” is based on a true story, and follows the journey of a musician who moves back to her home in St. Louis after a breakup with her girlfriend. Becks is played by Tony awardwinner Lena Hall. Local musicians Siren Mayhew and Sean McMahon will perform at a post-film beer and wine reception, sponsored by MVY Radio. The screening is at 7:30 pm on Friday, April 27.

“TransMilitary” kicks off day three of Spectrum at 4:30 pm. The 2018 documentary examines the challenges transgender servicemen face in a military that includes 15,000 LGBTQ soldiers. Four are spotlighted, with the varying issues they must address, and they help confront the rules and prejudices in military leadership. A Skype Q and A with co-director Fiona Watson will follow.

At 7:30 pm, the Film Center will screen “Disobedience,” where Rachel Weisz plays the lesbian daughter of a rabbi living in London’s Jewish Orthodox community. The film was directed by Sebastian Leilo, an awardwinning director for the film “A Fantastic Woman.” Vineyard Rabbi Caryn Broitman and Vineyarder Ljuba Davis will lead a post-film discussion.

Spectrum’s fourth and final film is Tony Kushner’s “Angels in America,” directed by Marianne Elliott. The film takes viewers through America in the mid-1980s, in the midst of the AIDS crisis and a conservative Reagan administration. According to the M.V. Film Society website, it’s a film where New Yorkers grapple with life and death, love and sex, heaven and hell.

“Angels in America” is a two-part play, and won the Pulitzer Prize for drama in 1993. It is said to be one of the most important plays of the century, starring Andrew Garfield and Nathan Lane. It was filmed during a London live performance, and will screen at the Film Center at 12:30 pm.