Helen Vera Sadowy Reimann, 83, died of cardiac arrest on May 12, 2018, at home in the loving company of her husband of 57 years, William Page Reimann. 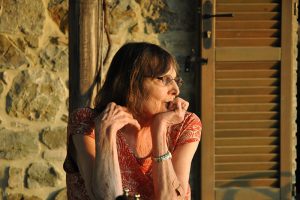 Born on Jan. 16, 1935, Helen was the daughter of John (Ivan) and Catherine Hawrylenko Sadowy. She attended Washington Irving High School in New York City, excelling in art and mathematics, and graduated from the Cooper Union for the Advancement of Science and Art (1957), where her focus was on painting in oil. Initially awarded a Fulbright grant through the United States Department of State Bureau of Educational and Cultural Affairs, her award was revoked after the launch of the Soviet Sputnik satellite.

Helen went on to Yale University (M.F.A., 1959). The Yale Art Department, headed by Josef Albers, was one of the finest teaching institutions of the day. Still, Helen’s talent distinguished itself, with advancement opportunities offered by Bernard Chaet, a mentor, among others. She was a finalist for the department’s Alice Kimball English traveling fellowship in 1959, but the award ultimately went to a male student. Helen’s paintings during this period were much desired, and did not stay in the studio long. Owing to the technological limitations of the day, there is no catalogue of this work.

Also at Yale she met her future husband, Will. Will was awarded the Alice Kimball English traveling fellowship in 1960. They were married June 3, 1961, following the completion of his year overseas. After a period of three years in Norfolk, Va., Will joined the faculty at Harvard University, and the young family moved to Cambridge, where they would remain together for the next half-century.

Born into a native-speaking Ukrainian home, Helen grew up in Williamsburg, N.Y., and later Manhattan. As a teenager, she explored New York’s diverse cultural and artistic offerings and the coffeehouse scene of Greenwich Village. While she was visiting the building site of the future Guggenheim, architect Frank Lloyd Wright picked her out of the crowd, inviting her and a friend to a behind-the-scenes tour of the as-yet unopened building — and dinner. This was the artist’s life that Helen would come to love: spontaneous, conversational, and open to unexpected exchanges. Yet Helen was also grounded in a darkly comical awareness of life’s tonal contrasts. It was not uncommon for her to come home to find her mother, Catherine, asleep in her bed, a simple but effective strategy for monitoring her daughter’s schedule. And as Helen, through the 1950s, experienced the personal highs of recognition, her parents, illegal immigrants from Soviet Ukraine during the 1920s, were threatened with deportation. The family would express long-term gratitude to a program under F.D.R. that legitimized their status and allowed them to avoid this outcome.

Helen would come to love her life in Cambridge, but she always felt something of an outsider on account of her Eastern European heritage and modest upbringing. The stress of her immense talent was a double-edged sword: The quality of her paintings spoke for itself, but she never felt she had completed sufficient work. A dedicated partner to Will and tremendous mother to her children, the necessary focus for a consistent return to her work eluded her.

Helen and Will have stayed in their son Christopher’s Martha’s Vineyard guest house basically once a month for about a week since 2007, and loved coming here and spending time with their grandchildren, Ruby and Klara, who are now freshman at MVRHS.

A celebration of Helen’s life is being scheduled for late June at the Cambridge Boat Club. Please contact the family for details.