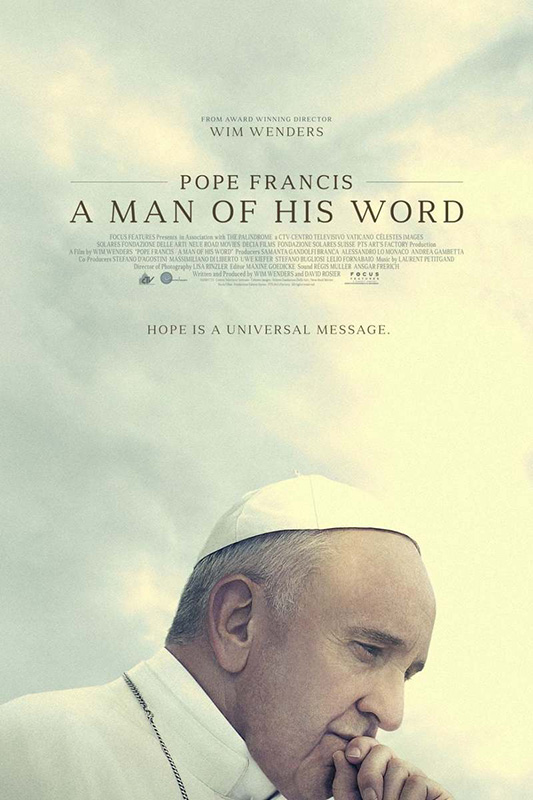 This weekend, the Martha’s Vineyard Film Center will screen two documentaries: Wim Wenders’ “Pope Francis: A Man of His Word” and Matthew Miele’s “Always at the Carlyle.”

German director Wim Wenders is a three-time Oscar nominee known for his 1984 film, “Paris, Texas,” and for his 1999 documentary, “Buena Vista Social Club.”

In 2013, he was invited to the Vatican to create his newest documentary, “Pope Francis: A Man of His Word.” Throughout the documentary, Wenders makes use of the Interrotron, which is a filmmaking device developed by Errol Morris that allows interview subjects to make direct eye contact with the camera. The filmmaker relies heavily on medium shots of the Pope, but

balances them with scenes from the leader’s worldwide visits.

Pope Francis is a powerful and inspirational leader of the Catholic Church. His articulate and moving words as a humanist provide a welcome and uplifting message at a troubled time in history.

Pope Francis, born Jorge Mario Bergoglio, worked his way up from Catholic priest to provincial superior of the Jesuits, to archbishop of Buenos Aires in 1998. He was created a cardinal in 2001 by Pope John Paul II, and named pope in 2013.

Bergoglio became the first Jesuit Pope, the first from the Americas, and the first to adopt the name of St. Francis of Assisi. The choice reflects his commitment to austerity, the environment, and the radicalism that St. Francis was known for. The pontiff is is considered controversial in some quarters for his liberalism and social engagement, which contrasts with his predecessor, Pope Benedict XVI. Pope Francis doesn’t shy away from tough conversations about atheists, homosexuals, and pedophiles.

Pope Francis includes the church in his discussion of poverty, the environment, the refugee crisis, and the world’s over-reliance on wealth. Pope Francis visits many of his subjects and admirers all over the world. He washes the feet of prisoners, reaches out to sick children in a Central African Republic hospital, and meets with Philippine typhoon victims.

Pope Francis is an activist, and speaks with ease to the thousands of worshippers and fans who gather to hear him. He meets with leaders of many faiths, as well as political heads including Vladimir Putin, Barack Obama, and Donald Trump.

Rather than serving as a biography, this film works as a rousing hour-and-a-half sermon about a man who is both wise and inspiring. Like Ruth Bader Ginsburg, the Pope is a different and welcome kind of celebrity. In the hands of Wenders, the film is well-visualized and engrossing.

Screening for the first time at the Film Center this weekend, “Always at the Carlyle” celebrates the renowned New York City hotel on Manhattan’s elegant Upper East Side. The Carlyle is a well-known city hotel that serves as home away from home for the rich and famous. The celebrities interviewed share an enthusiasm for this old-fashioned establishment. For most, it’s their favorite hotel. George Clooney and his wife spent three months there while working on a film. While visiting the U.S., the Duke and Duchess of Windsor also stayed there. Paul Newman created his famous salad dressing at the Carlyle.

19th century writer and philosopher Thomas Carlyle. Although the staff is discreet

about the lives of hotel guests, they love their jobs, and share stories of times when Steve Jobs, Michael Jackson, and Princess Diana traveled in the same elevator.

At $10,000 a night, the Carlyle doesn’t cater to ordinary folks, nor does writer and director Matthew Miele mention anything derogatory. Celebrity mongers will especially enjoy this account of a world-famous hotel.

For more information and to purchase tickets, visit mvfilmsociety.com.