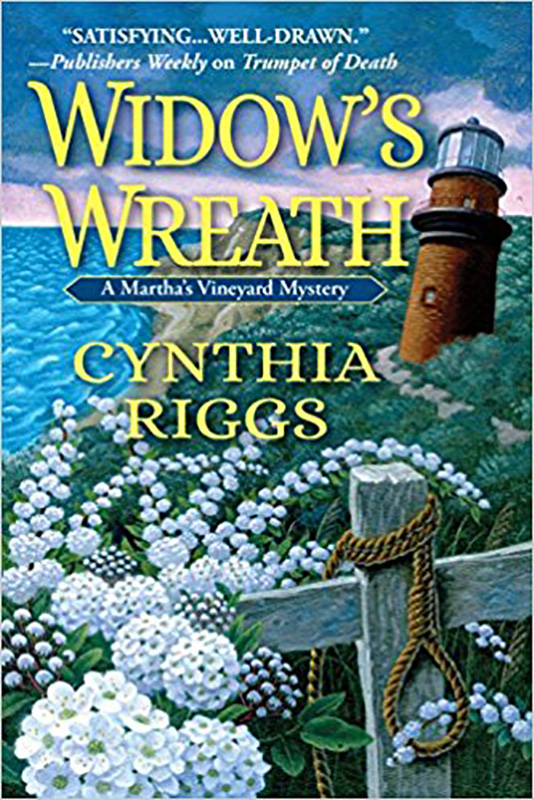 If you expect wedding bells at Victoria Trumbull’s house for her distant cousin Penny Arbuthnot, you will be sorely disappointed. A dead body hanging in Victoria’s cellar is just the first hitch. The fact that Penny and her fiancé Rocco each mistakenly believe they are marrying into riches puts another kink in the wedding plans.

Early on we learn that the real target for the murder was Rocco, with the rest of the book a suspenseful tale about whether he’ll leave the Island alive before the next attempt on his life. What follows is a complex web of characters, most of whom are entangled by family connections and, we soon discover, have their own motives to want to see the groom dead. Let’s say there is no love lost between any of the possible suspects and Rocco. Asked about the reason for such complicated character relationships, Riggs said, “I don’t want my books to become formulaic, so I experiment with the characters, their roles, and my plots.”

For those who yearn for Victoria’s keen detective skills as a deputy of the West Tisbury police, she largely sits this one out. Instead, we are introduced to almost all the characters through their visits to her rambling house, which closely resembles the circa 1750 Cleaveland House that Riggs lives in herself, the eighth generation of her family to do so. Riggs also uses Victoria’s ponderings about the unfolding situation to help us try to make sense of what’s going on underneath all the comings and goings.

You might need a scorecard to keep track of all the players and their separate stories in the book as they track Rocco down. Riggs adds an outside Italian mob-like element into the plot, with the two patriarchs of the family pulling some, but not all, the strings from a distance.

For those who know the Island, Riggs, as always, writes with great specificity about the Vineyard locations in which the tale takes place, so that it unfolds cinematically in the reader’s imagination. In “Widow’s Wreath,” some of the action takes place in West Tisbury and Edgartown, but particularly Oak Bluffs, where Riggs’ descriptive use of its labyrinth of small one-way streets around the Campground plays its own part in the story.

Asked what she would like readers to know, Riggs shares, “I want my readers to be entertained, distracted from the real world for a short time. I try in all my books to have some aspect of social consciousness; every one of my books addresses ageism. ‘Widow’s Wreath’ calls attention to the often brilliance of autistic savants.” Now, if you want to know what she means by this, you will have to read the book.

Roe decision ‘wrong on so many levels’