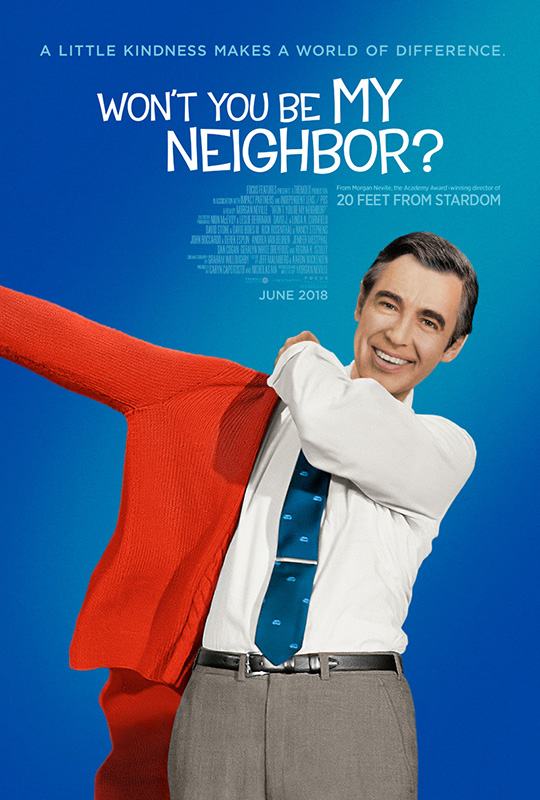 Continuing this weekend at the Martha’s Vineyard Film Center is “Won’t You Be My Neighbor?” a documentary about Fred Rogers’ classic children’s TV show “Mister Rogers’ Neighborhood.” Director Morgan Neville, who won an Academy Award for “Twenty Feet from Stardom,” directed this heartwarming tribute to a show and its host that represent a different form of programming for children’s television.

Fred Rogers was an ordained Presbyterian minister and trained musician. He chose television as a way to communicate values to young children — he was displeased with the way the medium addressed children at the time. The half-hour PBS show “Mister Rogers’ Neighborhood” ran from 1968 to 2001, and was an avatar of kindness and respect for childhood.

Neville, who attended screenings at the Film Center earlier this week, answered questions about the film and its subject. “He was a minister in the purest sense,” Neville said. “We need more Fred Rogers in our culture.”

Neville believes Rogers’ message is timeless. He described the television show host as “a rare person in our culture who transcends boundaries. He’s talking about the most basic ways we relate to each other. I feel like I knew him.”

Rogers vacationed on Nantucket for most of his life, writing scripts there. He received thousands of letters from children annually, and responded to each of them. “It was a way for him to minister,” Neville said. The film is getting wider and wider circulation, which isn’t typical for a documentary, according to the director.

Rogers began each show by singing as he walked onto to a bare-bones set. He took off his suit jacket, replaced it with a cardigan sweater, and traded his leather shoes for sneakers. His informality contributed to the show’s relaxed and casual atmosphere. Rogers’ gentle demeanor depicted a different kind of individual than usually shown on TV. It reflected his real personality rather than a made-up role. Rogers won a Lifetime Achievement Emmy in 1997.

The TV host used 10 hand puppets to deliver messages about how children should behave and feel. A favorite was Daniel Striped Tiger, a shy and friendly animal who lived in a clock without hands, signifying the suspension of conventional time in the world of make-believe. King Friday XIII lived in a castle, and was often the imperious and bossy monarch of the Neighborhood’s imaginary world. The Neighborhood Trolley arrived on train tracks and used its whistle and bell to communicate. Live characters also inhabited the Neighborhood. Lady Aberlin (Betty Aberlin) acted like an older sister to the puppets, and Mr. McFeeley (David Newell) was the “speedy deliveryman” bringing letters and packages to Mister Rogers. Officer Clemmons (François Clemmons) was the Neighborhood’s police officer, and Handyman Negri (Joe Negri) was the guitar-playing handyman.

A hallmark of the show was its treatment of issues that most children’s shows avoided. Death came up in the demise of a goldfish, and divorce was forthrightly explained. Discussions of anger, hurt, sadness, and bullying found places in the program, as well as current issues. In one episode, Rogers shares a foot soak in a wading pool with Officer Clemmons, who is African American, an illustration of racial togetherness. Rogers talked about assassination after Robert Kennedy’s death and the attempt on Ronald Reagan. He also discussed the Challenger disaster, the Gulf War, and 9/11.

In an era when too many children grow up on a TV diet of superheroes and violence, “Won’t You Be My Neighbor?” illustrates a different, more positive model of programming. Tom Hanks is scheduled to star in a Mister Rogers’ biopic next year.

Edgartown summer resident Beth Usher attended “Won’t You Be My Neighbor?” screenings earlier this week. When she was a child, she suffered from Rasmussen’s encephalitis, and Rogers visited her at the hospital. He gave her puppets she still has today, which she brought along to the screenings. Rogers died in 2003, but the two maintained a close friendship for 20 years.

Information and tickets for “Won’t You Be My Neighbor?” and other films playing at the M.V. Film Center, the Capawock, and the Strand are available at mvfilmsociety.com.