Katherine Pierce Wilson died peacefully on April 1, 2018, in New York City. For much of her life, Kate battled more than most knew, fighting multiple sclerosis and chronic rheumatoid arthritis with heroism and dignity, and more recently dealing with multiple hip surgeries and other serious health conditions. She lived her life with grace, never revealing how much her illnesses affected her. 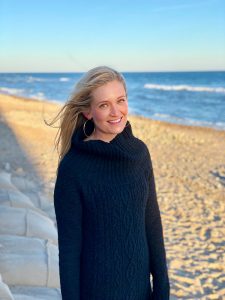 Kate was born in New York City on Feb. 8, 1985. She attended the Nightingale-Bamford School in New York from kindergarten through her graduation in 2003. She graduated from the University of Vermont in 2007. After college, Kate worked as a TV producer and music journalist, including stints at VH1 and Plum TV. Her passion was music, and her baby was nycmelody.com, where she wrote about new artists, reviewed concerts, compiled Top 10 lists, and eulogized music legends. Her blog had thousands of followers, and will live on, as one of her close friends takes over.

Kate lived in New York, but spent every summer of her life on the Vineyard. It was her favorite place. She loved everything about the Island — spending time on its wide variety of beaches, where she found beauty and tranquility, walking, reading or basking in the sun. She especially enjoyed the Vineyard’s music scene.

Throughout her challenges, Kate was sustained by the profound love she gave to, and received from, her treasured family and friends. Devoted to her family, she was a loving daughter, sister, and, especially, a doting aunt. She was a good friend, touching countless people. Scores of those whose lives she brightened have sent messages about how much she helped them through a difficult time or problem. Some recount events as early as when she was in nursery school, others as recent as shortly before she died.

Kate is survived by her parents, Paul and Elaine Wilson of Vineyard Haven and New York City; her siblings, Holly Swanson of Henderson, Nev., Paul Wilson of New York City, and Kiri Key of Marblehead; her nephews, Jamie and Robby Swanson, and Dylan and Alex Wilson; her nieces, Lucy and Hadley Key; her brothers-in-law, Eric Swanson and Ramsay Key; and her sister-in-law, Tara Wilson.

Donations in Kate’s memory may be made to the National Multiple Sclerosis Society or the Arthritis Foundation.

A celebration of Kate’s life will be held at the Vineyard Haven Yacht Club on July 21 at 5:30 pm.