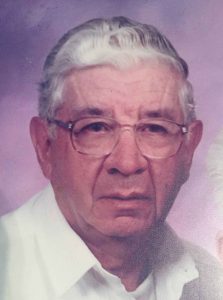 Jimmy, as he was known to his many friends and customers, was born in West Tisbury on New Year’s Eve in 1924, one of 11 children born to Raul and Rose Maciel.

The Maciel family moved to Tisbury, where Jimmy attended the Tisbury School until Army service in World War II interrupted schoolwork. Staff Sergeant Maciel served in the European Theater until his honorable discharge in 1946.

A short time after his return to the Island, Jimmy began to work for his brother, Manuel Maciel, in plumbing. He met Leona Dow, a schoolteacher at the Tisbury School, and they married on Feb. 21, 1953. Jimmy then began his own plumbing business, James P. Maciel Plumbing and Heating.

In 1989, James and Leona retired, turning the business over to their son Corly. They moved to Florida, eventually settling in Zephyrhills. Jimmy regained his love for golf as a member of the Scotland Yards Golf Club. He quickly became known for his chipping and putting, scoring an amazing six holes in one.

Jimmy had to leave Florida last year, and returned to the Vineyard to be cared for by his family after a series of medical issues.

He is survived by his two sons, Neal and Corliss (Corly), his daughter-in-law Marilyn, and grandsons Curtis and Denver. He was predeceased by his wife Leona and grandson Michael James. He is also survived by his sisters, Mary Hoffman, Anna Constantine, and Evelyn Christopher.

A graveside service will be held on Wednesday, July 18, at 10 am at the Oak Grove Cemetery in Tisbury, officiated by the Rev. Michael Nagle, with military honors provided by the veterans of Martha’s Vineyard.