Rhoda Lesser Diamond died on June 30, 2018, at the age of 97. A summer resident since 1950, Rhoda began living year-round on the Island in 1993, when she moved here with her husband, Dr. Monroe Thomas Diamond. After her beloved Tom died in 1997, Rhoda immersed herself in a multitude of Island activities, inspiring all who knew her with her positive spirit and her zest for life and community. 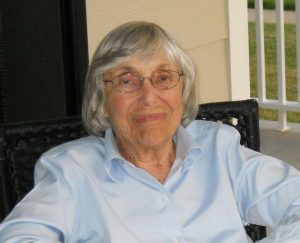 Rhoda was born on March 30, 1921, in New York City. Her father, Jacob Joseph Lesser, born in Russia, had a law practice with his brother Henry. Her mother, Rae Virginia, was a schoolteacher. Rhoda had an older brother, Lawrence Lesser, an attorney, and an older sister Beatrice, an actress. After attending Julia Richman High School, Rhoda attended Radcliffe College (Harvard University), where she majored in economics, graduating in 1942 with honors. She worked for the federal government in Washington, D.C., during World War II, and then returned to New York City, where she worked for the Civil Service Leader newspaper. She met Tom at a ski club meeting, finding common ground in the fact that neither of them skied.

Rhoda and Tom raised their three children, John, Ginnie, and Paul, in Chappaqua, N.Y., where Tom, an internist, had a general medical practice. Rhoda obtained a master’s degree in library science at Columbia University, and worked in several local libraries as a reference librarian.

Rhoda and Tom were inseparable — they were apart only one day in their 49-year marriage. After Tom died, her family wondered how she would go on without him, and they were amazed by her resilient spirit and her tireless determination to live every day to the fullest. She took advantage of the huge array of activities available year-round on the Island, the plays, concerts, movies, and lectures; she never missed the Martha’s Vineyard Film Festival, and attended several movies this past March, even as her health was failing.

She loved the Hebrew Center clergy and community, and took great joy from belonging to a warm and loving congregation. She served on the Hebrew Center board for several years. Amidst a whirlwind 97th birthday weekend with her children, she attended the Seder at the Hebrew Center. She was a devoted member of the board of the Friends of the Chilmark Library and the League of Women Voters. She worked out at the Y, even participating in the indoor triathlon on her 94th birthday. Through the years, she also helped organize the Island’s Women’s Symposium, which featured accomplished female speakers who were asked to talk on a theme selected prior to each event. She loved her book groups, discussion groups, and luncheon groups, which kept her busy every day until just weeks before she died.

Rhoda was blessed with many Vineyard friends and also caregivers, who, with compassion and generosity, visited with her and included her in so many activities into her later years. Visits to the Post Office, grocery store, and even the dump took hours because of the friends she would run into, each one of whom she greeted with her big smile. Several people have commented that she was an inspiration to them in her determination to live life to the fullest and to be part of so many of the activities that the Vineyard has to offer. She did not want to miss a minute of it, wearing out her much younger companions.