Robert (“Buffy”) E. Northrop, 80, of Bethlehem, Conn., died on Sunday, July 1, 2018, at the VITAS Inpatient Unit at St. Mary’s Hospital, surrounded by his family and many close friends. He was soulmate and best friend of Christina Pratt, with whom he lived. 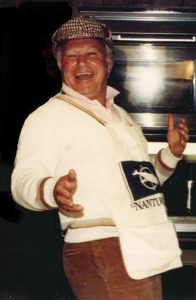 Buffy was born in Waterbury on March 7, 1938, son of Earl and Margaret (O’Shaunessy) Northrop. He graduated from Cheshire High School in 1956. He was class president, homecoming king, and captain of the football, basketball, and baseball teams. After high school, he proudly joined the U.S. Marine Corps, and later served in the USMC Reserves — an experience that he cherished his entire life.

He dedicated his career to the tool and die industry, and represented several Fortune 500 manufacturers throughout the U.S.

Beyond his professional work, Buff had several lifelong passions that helped define him as a larger-than-life person to all who knew and loved him. He was a great lover of jazz, and began collecting vinyl in the 1950s, eventually accumulating a collection of well over 4,000 classic albums.

His passion for cooking began early as well, but if you ever ate with him you would know that the meals did not! With his extended cookbook library and packed spice racks and cabinets, he could take you on a world-class culinary tour without ever having to leave his kitchen.

An avid golfer, he served for years as social director at the Waterbury Country Club. “When in doubt … putter out”: a technique that befuddled many an opponent … and often his playing partner.

He was a dedicated and loyal fan to all of his teams … the Nets, the Jets, and the Mets, and let’s not forget our Hartford Whalers … Go Whalers!

Buffy’s children are setting up a scholarship in the arts in their father’s honor:

Buffy was a true lover of life and people, whether family or friends. All were always welcome, and there was always more room at his table. We will miss him dearly … and learn to cook.

For more information or to send condolences, visit chaseparkwaymemorial.com.