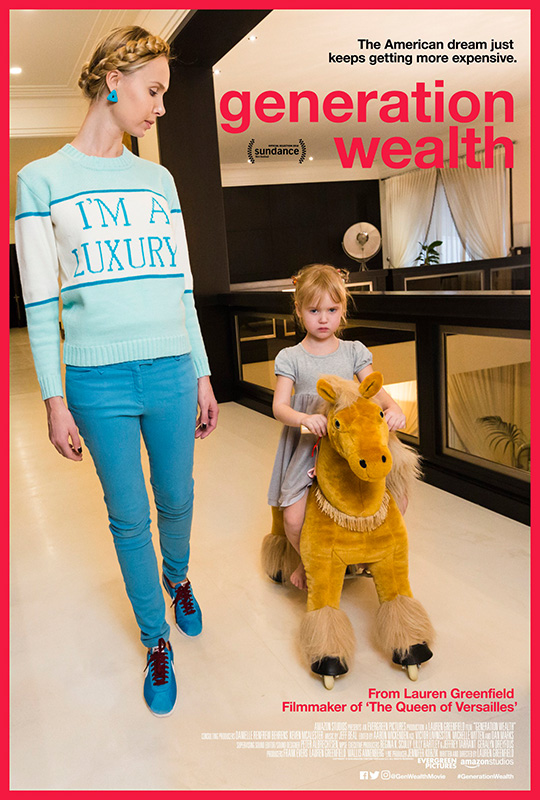 Photojournalist Lauren Greenfield has turned her latest photo exhibit and award-winning book “Generation Wealth,” into a documentary. It will screen at the MV Film Center on Wednesday, July 25, and Thursday, July 26, with Greenfield in attendance. The Boston-native is a chronicler of social extremes, and put together an overall look at today’s pursuit of unlimited wealth.

Greenfield captures a range of excessive behaviors related to money and acquisition, weaving in elements of her own life. She started her career in 1991 taking photos if a village with her mother in Chiapas, Mexico, for National Geographic. When the magazine decided not to run the  story, she was ready to give up photography. Fortunately, she didn’t.

In her 1997 book “Fast Forward” she looked at the lifestyles of affluent teens in Hollywood. In “Generation Wealth,” she visits them 25 years later to see how their lives turned out. Another frequent subject is the German investment banker Florian Homm, charged with fraud in the U.S. but now residing in Germany free from extradition. He talks about his life of excess, which included paying a prostitute to deflower his 15-year-old son. He calls himself “a hamster in a diamond-studded gold wheel.”

Greenfield also interviewed a woman whose ambition was to purchase a Birkin handbag. This status symbol sells between $11,900 and $300,000, and once she acquired it, she asked herself, “What next?” Greenfield’s 2006 documentary, “Thin,” looks at anorexic women. “The Queen of Versailles,” is about a billionaire couple’s construction of possibly the world’s largest house. These subjects are revisited in “Generation Wealth.”

Greenfield does not confine her study of wealth to the U.S. She visits Iceland’s bank excesses before its economic crash. She also visits China, where a billionaire built a replica of the White House with Mount Rushmore in the background. In Moscow, the affluent are seen acquiring huge home libraries without looking at the books, and a debutante ball that features the daughters of oligarchs.

The photojournalist returns at length to the subject of her 2002 book “Girl Culture,” proposing that the obsession with wealth has commodified women who pay a high price for it. She illustrates this through pole dancing classes, strippers, and examples of plastic surgery gone amok. Among the most distressing images are of a small-child beauty queen whose ambition is to have lots of money. Journalist Chris Hedges serves as the narrator who analyzes how global capitalism destroys cultures.

This is the second time Greenfield has visited the Vineyard for a film screening and workshop. “Generation Wealth” goes into limited distribution on July 20, then nationally, and will return to the Film Center on July 25.

Greenfield’s ability to win the confidence of her subjects and photograph them in bright, compelling colors makes “Generation Wealth” a captivating film for viewers. Greenfield said she stays in touch with many of her subjects.

Information and tickets for “Generation Wealth” and other films at the Film Center, Capawock, and Strand are available at mvfilmsociety.com.