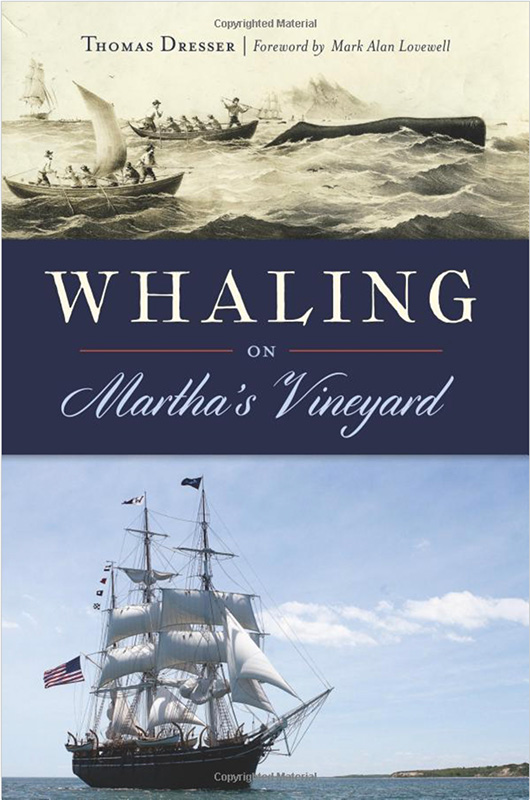 For anyone who’s ever been fortunate enough to see a behemoth whale in open water, it’s unimaginable that five or six men, in only 30-foot boats on the roaring seas, had to get close enough to throw harpoons that would eventually kill this leviathan, which, in fact, could smash their puny vessel with a mere flip of its tail, or grasp a man between its massive jaws. In “Whaling on Martha’s Vineyard,” local author Thomas Dresser disillusions us of any romantic notions we might hold about the “good ole” whaling days in Edgartown. The Vineyard’s captains and crew were the most sought-after in the industry. Many an eager 13- or 14-year-old-boy soon discovered once onboard ship that whaling was not for the faint of heart. Maybe there was an adrenaline rush to the chase and kill, but what came after was dirty, noxious, exhausting work, often alternating with weeks of tedious boredom before starting the exhausting, dangerous process once again upon hearing “thar she blows.”

Dresser dedicates each chapter to a different facet of Vineyard whaling, from the voyages themselves to the role of financiers, or captains’ wives onboard ship, the life of a crew member, and even a chapter dedicated to mutiny. He grounds the book in whaling’s historic beginnings with the Wampanoags who, centuries before white settlers showed up, primarily harvested whales that had drifted up on shore. In this chapter, he tells us that according to the Wampanoag, “the origin of whaling … is that their legendary ancestor Moshup dove off the Gay Head Cliffs and, swimming far out to sea, caught a whale by the tail and dragged it back to the Vineyard shore. He stood on the beach, swinging the whale around his head before dashing it against the clay cliffs. The blood from the whale turned the cliffs a deep, dark red,” referring to the striated, colored clay cliffs at the end of the Island in Aquinnah.

Dresser’s aim in “Whaling on Martha’s Vineyard,” he says, “is to provide a capsule summary of the whaling industry as it flourished from about 1700 to 1900 on the Vineyard. I want readers to recognize that the Island was key to the industry, providing a number of prominent whaling captains and crew a harbor that met the needs of the whaleships unable to dock in Nantucket, and a community that embraced and supplied the needs of the whalemen. While not as busy a port as Nantucket or New Bedford, Martha’s Vineyard did play a significant role in the development and success of the whaling industry at large.”

Dresser punctuates his overview with many fascinating tidbits. For instance, when boiling down the blubber in the massive brick stoves called tryworks, “the cook would occasionally toss chicken into the burning oil to be deep-fried, or dropped dough in the vat for doughnuts. Once the blubber had been tried or boiled, it was called ‘crackling.’” How about that in the 19th century, more than half the Vineyard’s males aged 14 to 19 went to sea? Whalebone helped fashion women’s corsets. And while it did not host not the whaling ship that brought back the tea used in the infamous Boston Tea Party, the Vineyard had its own subterfuge. An Island captain who sailed to London with whale oil returned here with tea, which was surreptitiously smuggled into his aunt’s basement in her house on a dirt road in Chilmark that is now called … Tea Lane.

What surprised Dresser most about writing “Whaling on Martha’s Vineyard” was that “it was the people of Martha’s Vineyard who made the industry a success, and that surprised me as I delved into the topic. As I read more and more about Vineyard whaling captains and crew, I realized Vineyarders were a key element to the whaling industry. Vineyard crew were recognized as excellent whalemen, from the Wampanoag boat steerers who threw the harpoon to the Portuguese whalemen who emigrated to the Vineyard after a successful whaling venture, to the farmhands who left the land for the sea and contributed to the voyage. Vineyard whaleship captains were outstanding leaders, handling all the responsibilities aboard ship to meet their ship owner’s goals.”

The decline in the whaling industry by 1900 brought about changes to the Vineyard. The Island turned to cultivating tourism, the industry that still drives the Island’s economy today. Ah, but that’s a whole other story in the Island’s history.

Dresser’s prose is straightforward, with one notable exception toward the end of the book when he speaks from the heart: “Whaling was a barbaric enterprise, killing peaceable leviathans for their oil to light our tables. For all its barbarism, whaling was still considered a necessity by a population on the cusp of the Industrial Revolution. The virtues and values of whale oil dominated economic needs at the time. Just as we rationalize why we raise and kill cattle today to replenish the food on our tables, so the capturing and killing of whales was considered just and appropriate a century or two ago. The situation changes, but man still dominates his surroundings.”