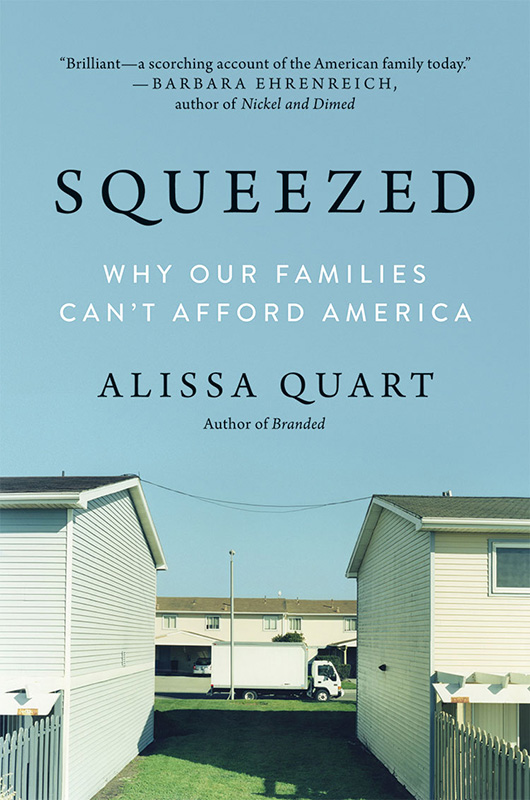 We are increasingly dazed and confused about our place in a nation that does not resemble the place and the people we thought we were and should be.
Now comes author and advocacy journalist Alissa Quart to explain in discomfiting detail what happened and why attainment of middle class status, one of our most prized cultural and personal possessions, is increasingly unattainable.

Her just-released “Squeezed: Why Our Families Can’t Afford America” uses themed chapters to explain the reality of the collapse of the middle class. Her themes are: pregnant and squeezed, hypereducated and poor, extreme daycare, life at the bottom of the top, struggling nannies, moonlighting in a gig economy, the myth of do-overs and the second-act industry, squeezed housing, the rise of 1 percent television, and the growing takeover of real middle-class jobs by robots.

Quart is the executive editor of the journalism nonprofit Economic Hardship Reporting Project, which supports journalists’ reporting projects on inequality in America. “Squeezed” is her fifth book on subjects of systemic inequality.

You can hear her views live at an August 6 panel on advocacy journalism at the fifth annual “Islanders Write” conference at the Grange Hall in West Tisbury.

Quart delivers a sharp and focused read. This is not a wonky sendup of trends and numbers. The numbers are there, not just about the roundly abused 1 percenters but also that two-thirds of Americans have the middle-class “uh-ohs.”

“It doesn’t matter what color your collar is,” says one of her sources. Indeed, Quart intermingles interviews with “upscale” but financially struggling professionals and the immigrant nannies who care for their kids (in addition to their own kids). What it’s like to be a lawyer or a professor working as contingent labor at ever-reducing rates of pay with a lifetime of college debt, paying $20,000 to 30,000 a year for childcare to people for whom $20K puts them under the poverty line. There’s not much difference between the Ph.D. and the nanny in quality of financial and emotional life.

She calls this vast swath of our society the Middle Precariat. ‘Precariat’ was coined to describe a rapidly expanding working class with unstable, low-paid jobs. She writes in a previously published essay that “what I call the Middle Precariat, in contrast, are supposed to be properly, comfortably middle class, but it’s not quite working out this way.”
“Squeezed” is a powerful book. It enlightens and provides context in real-life stories of people trying to make it in America, not to strike it rich but to live in relative freedom from financial brinkmanship, and with career satisfaction.
One litmus test of a powerful book, seems to me, is whether its story evokes similar, perhaps long-buried, personal experiences in the reader. “Squeezed” did for me, over and over. For example, in discussing the carnage of daycare in America, Quart says about 200 American companies are providing daycare facilities in the workplace. I remembered instantly stories I wrote 50 years ago about the Green Shoe Manufacturing Co. (a.k.a. Stride-Rite) providing daycare in its ancient plant in a tattered Boston neighborhood. That move eased its workers’ lives and helped the company remain vigorous in a cratering industry moving overseas for survival.
Takeaway: Two hundred companies after 50 years? Really? That’s the best we can do?
Though the generally good souls who make up the middle of our population tend to blame themselves for their pickle, Quart argues that blame serves no good purpose for anyone, and that the failure is a systemic one. Our workplaces and governance have systematically failed its strivers.
The green parts of this book for me are the efforts many of us are making to find our own solutions, through co-housing and co-parenting, the things people used in tribal times when humanity was new and co-reliant.
A new genre of cooperative and collaborative websites is flourishing. Care worker cooperatives and unions are seeking roots. Co-ops like Beyond Care now compete with for-profits like TaskRabbit.
Quart lobbies in “Squeezed” for financial support in universal basic income guarantees, creative pre-K programs, and real tax credits for the real work of caregiving, from infants to geriatrics, that goes unpaid now to the tune of $700 billion in our country. New York City, a couple of states, and Canada and Sweden are making themselves great again with notions like these, Quart notes.
The color of your collar, or your red or blue state, doesn’t matter. Quart reveals in this work that we’re in this together.

“Squeezed: Why Our Families Can’t Afford America,” nonfiction by Alissa Quart in hardcover from Ecco, $27.99. Available through Bunch of Grapes bookstore in Vineyard Haven and online. Quart will speak at “Islanders Write” on Monday, August 6, at 1:30 pm. Visit islanderswrite.com.