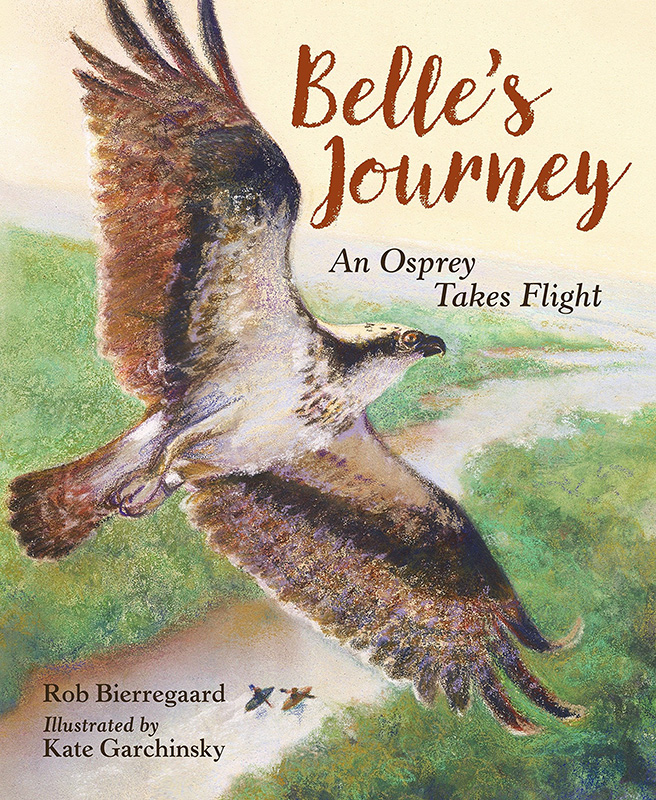 You don’t need to be an avian aficionado to delight in Rob Bierregaard’s captivating book, “Belle’s Journey: An Osprey Takes Flight,” superbly illustrated by Kate Garchinsky. One of the elements that makes the book so engaging is Bierregaard’s unraveling of the impressive feat of Belle’s some-4,000-mile fall migration from Martha’s Vineyard to Brazil, at the southern edge of the Amazon rainforest — and her return flight north in the spring, a year and a half later.

Belle’s trip is amazing not just for the distance she travels, but the challenges she faces along the way, including a hurricane that blows her off course; being chased by a falcon; and meeting a hungry, seven-foot caiman (a cousin of the alligator) along the way. Belle’s story is mostly real, but some of the events Bierregaard pulls from experiences of other ospreys he has tracked for almost 20 years.

A scientist by profession, this is Bierregaard’s first publication for youth, and he explains, “It was actually a lot easier than writing a scientific publication. I like writing, and the voice I use in the book is pretty much how I talk about our research in normal conversation.”

He wisely uses two young friends — Island kids — as a vehicle to make the story easily relatable to a younger audience, and deftly provides information in an engaging, nonacademic manner. For instance, here is a scene where the two young friends, George and Ella, talk to Dr. B and his colleague, Dick:

“‘What do they [osprey] eat?” asked George’s friend Ella. ‘Nothing but fish.’ … ‘The transmitter is waterproof,’ Dick added, anticipating the next question.

“‘Why are you putting it [satellite transmitter] on the bird?’ George wanted to know.

“‘So we can learn about her migration. Every three days we’ll know everywhere she goes,’ Dick explained.

“‘Where will she likely go?’ George’s mother asked.

“‘Probably to South America. Most ospreys do,’ Dick said.”

Bierregaard explains, “The kids are made-up. They went through a few changes as the story was revised. They were named for a couple of kids who read an early version of the book. First, they were two girls but I decided I wanted a boy and a girl, so ‘Georgie’ became ‘George,’ and then they became Islanders. I put them in originally just to ask us questions, so Dr. B. — who is me — can explain why he’s doing what he’s doing. That scene, where kids watch us putting the radio transmitter on a young osprey, happened a lot at that location because we set up our operation on the road to the Tashmoo opening, and people walking down the road would stop and talk to us. Then the kids became more and more important in the story. I want to get young readers excited about the world around them, like George and Ella in the story.”

Nonetheless, because Bierregaard never oversimplifies or talks down to his audience, the tale is equally as engrossing to adult readers. An added bonus for Vineyarders is that he roots the beginning and end of the story in recognizable Island locations, and also brings the tale alive with his vivid prose, beginning with the very first page:

“It was a cold gray day in late March on Martha’s Vineyard. The temperature was struggling to break 50°, and heavy dark clouds filled the sky, pressing down on the island.

“High above Lake Tashmoo, a male osprey was carrying a silvery fish in his needle-sharp talons. He was giving a high, shrill call while he performed his sky dance. Two hundred feet over his nest, he climbed up and up and then hovered, showing off the alewife that he had pulled out of the cold waters below.”

Kate Garchinsky’s luscious watercolor pencil, ink, and aqua crayon atmospheric illustrations are an integral part of the book, and draw us even closer to the story’s drama. Garchinsky’s artwork is at once realistic and impressionistic, supporting Bierregaard’s blending of scientific fact and storytelling.

When asked “Why osprey?” Bierregaard responds, Because “they’re big, dramatic, and charismatic. And relative to many other raptors, easy to study because their nests are so easy to find. I was hooked on raptors at my prep school, Millbrook, which has, amazingly enough, a zoo run by the students. Through my connection with raptors, I contacted Gus Ben David back in 1969 (I had summered on the Vineyard since I was 10). Gus took me under his wing and showed me the wildlife of the Island. At the time there were only two pairs of ospreys on the Island — now there are over 100! I banded my first ospreys in 1971, and have been studying them ever since.”

“Belle’s Journey: An Osprey Takes Flight” will interest any reader who is interested in birds, nature, migration, or the Vineyard, or just likes a good read.

Rob Bierregaard will speak at the West Tisbury library on Friday, August 3, at 4 pm.