The Permanent Endowment for Martha’s Vineyard welcomes Isabelle Lew to its board of directors. Her knowledge of Island issues, her legal background, and her deep appreciation of the Island community will all be valuable assets to the board, according to a press release from the Permanent Endowment.

Lew was born and raised on Martha’s Vineyard. She moved back to the Island in 2016 to join law firm Reynolds, Rappaport, Kaplan & Hackney, and her law practice focuses on municipal and real estate law. Prior to returning to the Island, Lew attended Northeastern University School of Law, and later served as a law clerk to the Hon. Margot Botsford of the Massachusetts Supreme Judicial Court. Before law school, the release says, Lew worked at John Snow Inc., an international public health consulting firm, where she primarily focused on a cancer awareness campaign based in Mexico and funded by Livestrong. In addition to the Permanent Endowment, Lew also serves on the board of Vineyard Montessori School.

The Permanent Endowment is the Island’s community foundation. Established in 1982, it’s dedicated to strengthening the Vineyard community by providing grants to Island nonprofits, scholarships to its students, and fiscal sponsorship to Island initiatives. More information is available at endowmv.org or by calling 508-338-4665. 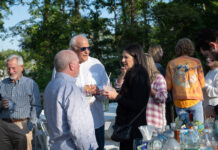