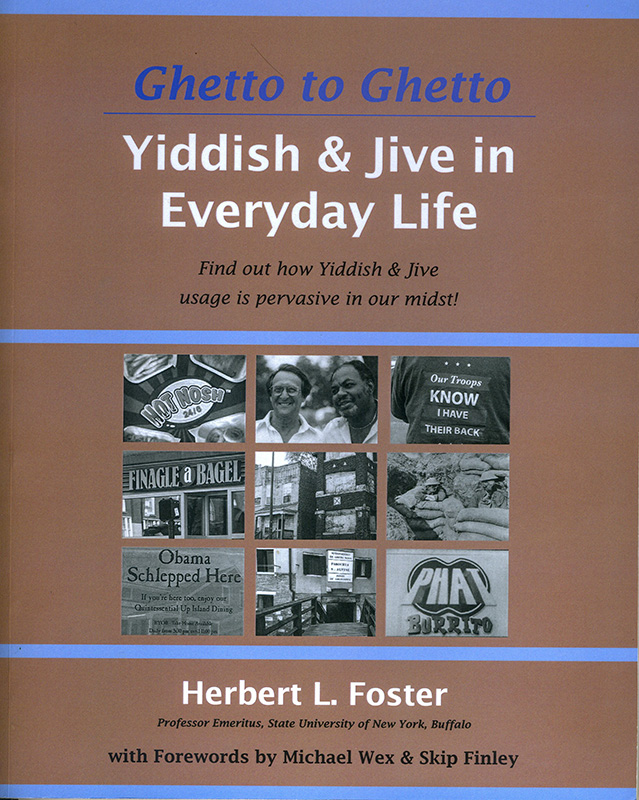 Herb Foster’s “Ghetto to Ghetto: Yiddish & Jive in Everyday Life” makes for fascinating reading, as he takes us through a world of information about Yiddish and jive words and lingo, pointing out how these terms permeate our everyday life in electronic and print media, television, books, radio, movies, commercial products, and the like — and to such an extent that we might not even be aware of it. He specifically chose Yiddish and jive because they are the two languages that have contributed more phrases and words to today’s common American usage than any others. You can delve into the book at any point, and you’ll see for yourself.

For Foster, writing “Ghetto to Ghetto” was an act of love, and one he decided to finally get down to. “As a professor working with a doctoral student, you came to a time where you explained to your student, ‘Enough Review of the Literature, now write.’ Practicing what I preached is important to me. Hence, I had to cut and cut to what is now the book. I also worked with Janet Holladay, who was a great editor.” It’s important to Foster as well that “‘Ghetto to Ghetto’ is the first book reporting on Yiddish and jive in the same book.”

The title, “Ghetto to Ghetto” itself is an example of how the same word can have different meanings depending on its context, who is using it, and when. The first official use of the term ghetto dates back to the 1500s, when Venice established an obligatory walled-in space, with guarded gateways and enforced curfew. Foster writes that “in the United States, ghetto refers to any area in which large numbers of lower-socioeconomic blacks live.”

For Yiddish, we learn that the language arrived on our shores with Eastern European Jewish immigrants starting in the 1880s, and spread to everyday use as Jews began to do business with non-Jews, and through Jewish mobsters and bootleggers, as well as comedians whose “shtick” carried Yiddish terminology into mainstream America.

Just some of the Yiddish words commonly heard in American English are “maven” (expert), “nosh” (small snack), and those with a little more pizzazz include “chutzpah” (brazenness), “kvetch” (to complain), and “schlep” (to drag, pull, or carry).

According to etymonline.com, the word jive appears in 1928 in American English, as a verb “to deceive playfully”; a noun meaning “empty, misleading talk”; and is the name of a style of fast, lively jazz and dance music, and probably of African origin.

Examples of jive include “finagle” (to manipulate), “pad” (bed, apartment, nightclub), “gig” (any kind of job or a jazz performance), and “get over” (beating the system or overcoming a difficulty). “Cool” has many distinctly different meanings (calm, fine, excellent, or aloof). Likewise, “funk” can refer to a bad smell or describe something having a sound of the blues. Foster points out that some jive words have a seemingly contradictory meaning, such as “bad,” which means good.

Foster’s research and illustrations come from a wide variety of sources, which he notes after each entry, and include books, articles, print and online media, dictionaries, personal correspondence, and personal sightings, such as his photo of the sign for the store Summer Shades in Edgartown, “shades” being a jive word for sunglasses.

Foster organizes “Ghetto to Ghetto” into eight chapters such as “Jewish and Black Ghettos,” “Everyday Use of Yiddish and Jive,” and one chapter devoted entirely to the term “Shabbos Goy” — a non-Jew who performs everyday activities that are prohibited by Jewish religious law on the Sabbath, such as turning lights on or off. Elvis Presley, Mario M. Cuomo, Al Gore, Barack Obama, Colin L. Powell, and Thurgood Marshall are just some of the surprises Foster lists in this chapter.

And what do James Cagney, Ralph Ellison, Fiorello H. LaGuardia, and Sir Michael Caine share in common? They are just a few examples of gentiles who Foster tells us spoke, or in Caine’s case, speak, Yiddish.

Foster hopes that with the book, “perhaps, Jews and blacks will find some additional commonalities that could bring them closer together, while being more understanding and respectful of one another.”

“Ghetto to Ghetto: Yiddish & Jive in Everyday Life,” by Herbert L. Foster. Tisbury Printer. Available online and at Bunch of Grapes in Vineyard Haven for $19.99.