Isabella Longcake Barker Ditchfield Clarke died peacefully at the Martha’s Vineyard Hospital on July 11, 2018. She was 91. 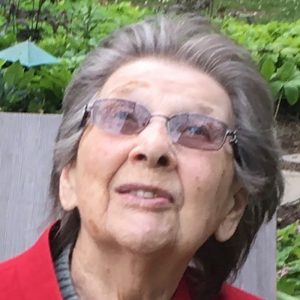 Belle, as she liked to be called, was born in Workington, Cumbria, a small coal-mining town on the edge of England’s Lake District. When she was 2, her parents, Tom and Margaret Barker, moved to Preston, Lancashire, where her father became a village police officer. During the war years, she spent some time with the Land Army, “doing her bit” picking vegetables. Also during those years, she met her future husband, Gordon Ditchfield, first when he had been promoted from “copyboy” to junior reporter at the Lancashire Evening Post, interviewing for stories at her grammar school, and later at a dance when he was on leave from the Royal Navy. They married after the war. In 1954, Gordon was offered a job with Reuters News Agency, and they moved to London — a big move at that time. Belle remembered the London years as being a particularly happy time, raising her two children, Michael and June. With Europe now at peace, Belle’s love of travel began, taking family camping trips to Spain, Italy, France, Germany, and the former Yugoslavia.

A new chapter began in 1965 when Reuters offered Gordon a two-year post in Washington, D.C. With teenage children in tow, the move was made to America. Little did they know that the transfer would become permanent, and that the family would later become American citizens. The U.S. also offered new possibilities for more than one family road trip to the West Coast, and travel for Belle and Gordon all over the world, to places such as Egypt, India, and China.

In 1980, when Gordon retired from Reuters, they moved to Martha’s Vineyard, where daughter June already lived with her husband and two children. Michael and his family followed a year later. The Vineyard was a perfect fit for Belle. She and Gordon became active in the Methodist Church, and made many new friends. After Gordon found a new life as a fisherman, Belle took up painting, and created many fine Vineyard landscapes.

Belle loved cooking and entertaining. Her door was always open, even during her children’s teenage years in England and D.C. A houseful of young people was always fun for her. On the Vineyard she took her grandchildren overnight every Friday, making Fridays forever “Grammy night.”

When Gordon died in 1999, Belle got a new life with the “Church Ladies,” as she called them. She even continued to travel, and went to Hawaii with her best friend, Joanne Ewing. But she had also begun a correspondence with an old friend, Ron Clarke, whose wife had died around the same time as Gordon. They married in Edgartown four years later; and she spent the next 11 years back in England with Ron, living in the village of Anstey, in Hertfordshire. In England she loved connecting with old friends, and going to the theater, along with trips back to the Vineyard to visit family. After Ron died, she moved back to the Island, and her last four years were spent living with her son Michael and his wife, Lynn. Even toward the end of her life, as her memory loss progressed, she kept her sense of humor, and loved to spar good-naturedly with the home health aides who came to take care of her, especially her beloved caretaker Laura DeBettencourt from VNA, along with Paul Dougherty from Vineyard Village, and toward the very end, Lori Perry from Hospice.