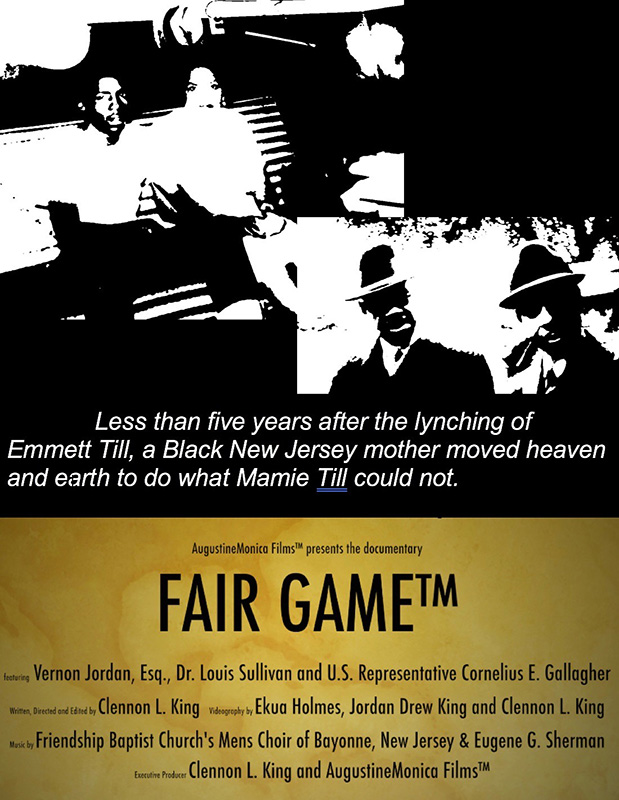 It’s easy to take a term like lynching and keep it at arm’s length. Maybe the last time you considered the concept, you were sitting in history class learning about the South in the early 1960s. It’s presented to us as a far-off concept — far in the past, far Down South, and far from where we are today. The definition of lynching is to kill for an alleged offense, with or without a trial. Journalist, filmmaker, and Vineyard visitor Clennon King’s newest documentary, “Fair Game: A 1960 Georgia Lynching Story” will reacquaint viewers with the term, and make them reconsider where it stands in the present day. The documentary tells the story of James Fair Jr., and screens at the Strand Theater this Tuesday, August 14, at 4 pm.

James Fair Jr. was born in Tampa, Fla., and moved to Bayonne, N.J., where he lived with his mother, two sisters, and brother for most of his early life. At 24, after receiving an honorable discharge from the Navy, Fair and a friend went on a road trip to Blakely, Ga. They arrived at an ill time, when the body of second grader Yvonne Holmes had just been discovered. Fair was blamed for the murder, and sat before a judge. Over the course of three days, he was arrested, arraigned, tried, convicted, and sentenced to death. He sat behind bars for the next 26 months, while his mother and lawyers fought for his life.

Filmmaker King is the son of Fair’s most aggressive lawyer, C.B. King. “He was the only thing black people had when it came to justice in Georgia,” the film said. King created the documentary as a tribute to his father.

“This was a case he talked about a lot,” King said in an interview with The Times. “He was a monster. He was a man. He didn’t take any prisoners.” His father represented Martin Luther King and Rosa Parks during the civil rights movement.

King talked about his process for creating the film: “I always thought about it, always wondered about it, and finally started it about 13 months ago after finishing my first film.” King’s first film, “Passage at St. Augustine,” screened at the Strand Theater last year.

“The process of what I learned with ‘Passage’ prepared me for creating this,” King said.

The story takes place in two towns — Blakely and Bayonne. “I consider one of the characters in the story to be Blakely,” King said. “I spent 20 minutes telling her story because she’s so important. In the end, James’ mother is rescuing him from the town more than anything else.”

King started his research in Bayonne, where he visited the local church.

“I found the pastor, and halfway through our conversation, he turned to the deacon and said, ‘Do you know who he’s talking about? Audrey’s brother.’ Come to find out the pastor was a relative of James Fair, and he cleared the way for getting to the rest of his family. You talk about signs. This felt like divine intervention,” King said.

Then, he made his way to Blakely, where he spent three weeks going through newspaper morgues and trying to find out who knew James Fair Jr. 60 years later.

To King’s surprise, many people remembered the James Fair story well. King conducted interviews from June through December 2017, talking to congressmen, relatives of the town sheriffs, friends and family of Fair, and community members of Blakely. Louis W. Sullivan is the son of Walter Sullivan, one of the founders of the NAACP. He grew up in Blakely, and is a seasonal Vineyard resident. His story is featured in the film, as is Vineyard seasonal resident Vernon Jordan’s, Fair’s law clerk. King conducted those interviews on Martha’s Vineyard last summer. Eventually, the filmmaker traveled to Kissimmee, Fla., where the Fair sisters live. “They were very amenable,” King reflected.

King hopes this film will remind people that the past is never the past, and the story tells a timely message of where we are today.

“We’re all James Fairs,” he said. “Those of us of color. People are getting blown away by law enforcement, and unless we mark history, we’re condemned to repeat it. There’s an old African proverb, ‘Until lions have historians, tales of the hunt will always glorify the hunter.’ That’s why I do the work that I do. This is about saving lives.”

King continues his work as a journalist and filmmaker. He has two projects in mind — one focused on his father, and the other on slavery in New England.

“Whatever I do, you can guarantee I’ll be talking about what America doesn’t want to talk about — race,” King said. “Hollywood doesn’t have a dang thing on real life.”

Updated to correct the town where Clennon King met the pastor with ties to the Fair family.